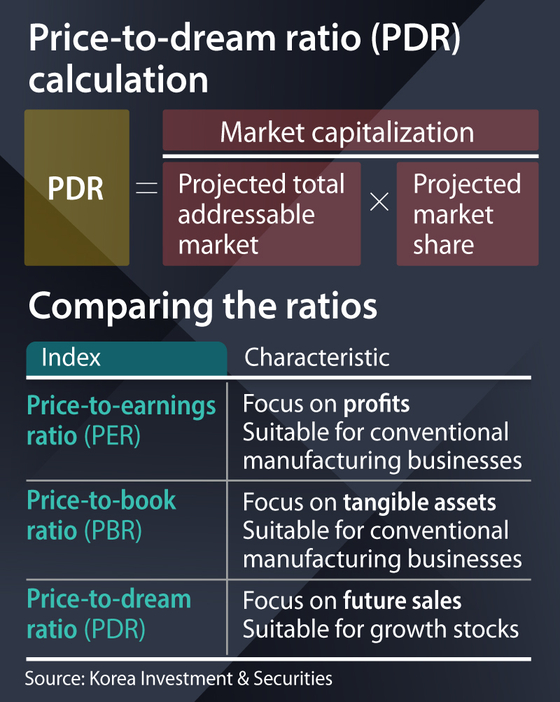 A new index for evaluating a company’s stock has emerged amid the coronavirus pandemic called the price-to-dream ratio (PDR) as conventional indices are seen as insufficient in interpreting the value companies, especially IT and rechargeable battery companies, that rose in value during the pandemic.

The price-to-earnings ratio (PER), which is the current stock price over the per-share earnings of the company, is used to gauge whether a stock is overvalued. The higher the number, the more likely the fundamentals aren’t keeping up with investor sentiment. When price to earnings is too high relative to the market in general and comparable stocks, some people say that the stock is overvalued.

PDR has emerged to interpret the stock of companies in industries based on their growth potential, rather than the profit or asset values. Korea Investment & Securities has recently come up with PDR and has been attempting to evaluate the value of companies using the index.

PDR can be arrived at by dividing a company’s market capitalization value by its prospects. The prospects are calculated by multiplying the industry’s predicted market size in 10 years by the company’s projected market share. For a company with market capitalization of 5 trillion won ($4.6 billion) and projected market share of 10 percent in a future 100-trillion-won industry, the PDR would be 0.5. The lower the value, the more undervalued the stock is compared to its growth potential.

“It is difficult to properly assess whether certain stocks are overrated using the barometers of the past for evaluating companies in the IT, bio and rechargeable battery sectors, whose stocks spiked throughout the pandemic,” said Baek Doo-san, an analyst at Korea Investment & Securities.

Korea Investment & Securities said the PDR index would be especially useful for evaluating the companies that fall under the “BBIG” category, which stands for battery, bio, internet and game. So far, the value of battery firms has been assessed based on their enterprise multiple, which is the enterprise value divided by earnings before interest, taxes, depreciation and amortization (Ebitda). Price-to-book ratio (PBR), which compares a firm’s market capitalization to its book value, was used as well.

These conventional methods are focused on the sales for two to three years and profit increases, not taking into account the potential of the EV battery industry, which is projected to reach 230 trillion won by 2030. PDR can address the issue.

Among the leading battery companies, including LG Chem, Samsung SDI and China’s CATL, LG Chem was the most undervalued, with PDR of 0.7. Samsung SDI’s value was 1.1, and CATL was 1.7.

“PDR can be a subsidiary index for evaluating a company’s worth,” said Yun Hee-do, head of research at Korea Investment & Securities. “For five items among BBIG industries, we are examining measures to replace PER and PBR with PDR.”