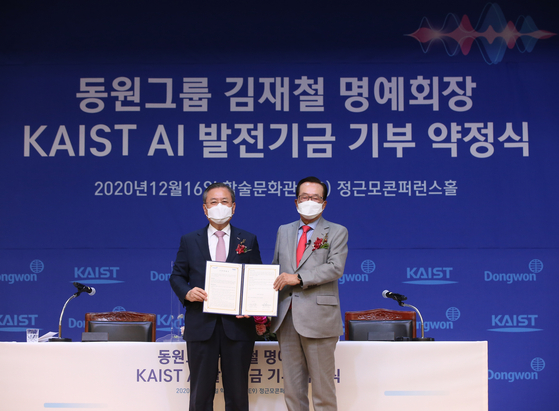 Dongwon Group founder Kim Jae-chul, right, and KAIST President Shin sung-chul pose together at an event marking Kim's donation to the university in Daejeon on Wednesday. []

The technology and science-focused research university held a ceremony to celebrate the donation on Wednesday, with a limited number of attendees including Kim and KAIST President Shin Sung-chul due to the pandemic.

The funding will be provided over the course of 10 years with the majority poured into KAIST’s Graduate School of AI, according to the university.

The name of the post-graduate school that opened last year will be changed to the “Kim Jae-chul Graduate School of AI” to commemorate his commitment to fostering leaders in technology.

“A big wave of AI will shift our lives to a greater scale than the first, second and third industrial revolutions did,” Kim said during the ceremony, “Today’s event paved the way forward into the leading nation in AI.”

“[I] hope KAIST will take on the historical role in making Korea lead the way in AI through the nurturing of talents,” he said.

The institute announced that the AI school will increase the number of professors to 40 by 2030 from the current 21.

The president expressed his gratitude, saying that Kim has embodied the spirit of noblesse oblige, a term used to indicate the social responsibility of people with advantages.

The 85-year-old stepped down last year from the top post at the conglomerate whose business encompasses seafood distribution, food services, construction, finance and packaging.

The retirement, announced during the group’s 50th anniversary ceremony, marked a rare case in which a chaebol leader voluntarily handed over the role.

Lee Soo-young, chairwoman of Kwangwon Industries, committed 67.6 billion won earlier this year to supporting a program called “Singularity Professorship,” which marks the single largest donation ever given to KAIST.

The program is a special track awarded to outstanding faculty members who explore intriguing academic disciplines with exceptional scholarship.