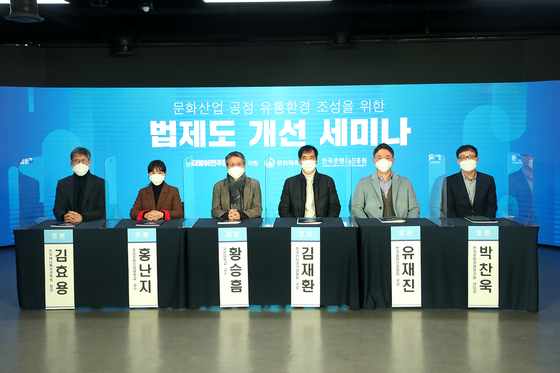 
With secondary content in the form of screen formats deriving from original content such as webtoons, web novels or books continuing to see major success, industry insiders are shifting focus to creating original content and intellectual property (IP).

However, legal boundaries to protect the creators and their copyrights only extend so far, and experts are voicing for the dire need to update legal institutions in tandem with the developing content industry.

“For instance, in the related articles they often begin with ‘without a just reason' or the meaning of a ‘just reason may differ accordingly in different circumstances,” Professor Noh Dong-ryeol of Sungshin Women’s University said during an online seminar titled, “Reform of legal institutions for a just trading system in culture industry,” hosted by the Korea Creative Content Agency on Wednesday.

“The standard contract forms often state that a party cannot request frequent revisions without a just reason. While this is not essentially a bad thing, the problem of who will cover the additional costs [following the revisions] remains. The current legal terms are very tenuous, and there is a pressing need [for the legal institutions] to precisely grasp the specifics of the circumstances so [the current terms] can be replaced with more suitable terms.”

Professor Noh also emphasized the need for educational reform into how IP is valued as it is often adapted into other content.

“Although the copyright of the IP fundamentally lies with its creator, the value of the property is often devalued, although it often transits to other value-added content,” Noh added.

Professor Hong Nan-ji of ChungKang College of Cultural Industries also expressed support for the need for an educational institution to inform cartoonists of the legalities of signing contracts.

“In order for a fair and horizontal relationship to be formed between the webtoon industry and others, we need to resolve the imbalance of information,” Professor Hong pointed out.

The professor went on to say that cartoonists often have trouble understanding all the legal terms in their contract and how responsible they are for their works if they are reproduced into other content.

President Kim Hyo-yong of The Animation Society of Korea listed the deeply rooted problems of the current industry such as how creators are often left to be responsible by the hired hand to revise their works.

“In the advent of the fourth industrial revolution and as 5G-based immersive content becomes popular, so does the value of animation,” Kim said. “Considering the traits of the culture industry, where there exists a clear distinction between superiors and subordinates, and since the majority of IP is distributed without a physical form, unfair personal relationships often expand into an unjust system between corporations.”

Executive director Park Chan-wook of the Korea Culture & Tourism Institute said that the success of BTS and “Parasite” (2019) proves that Hallyu and K-content can no longer be seen as individual success cases and that not only local but also global fans are now taking notice of the local culture sector.

“Right now the situation is a little vague due to Covid-19, but after this blows over, it’s highly likely that foreign investment in local content will surge,” Park predicts. “But in order for investment to be reinforced smoothly and actively, a more transparent and fair system in creation and distribution of content should be established.”