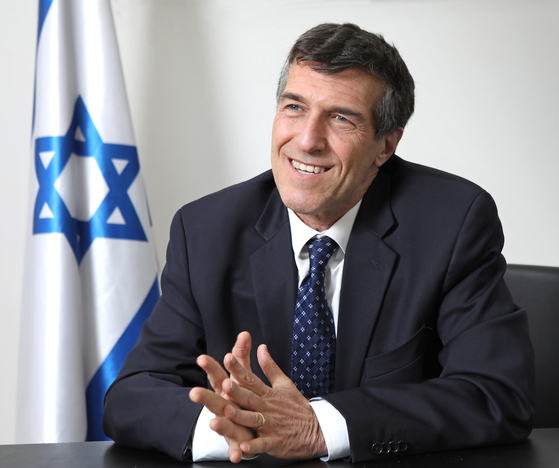 Ambassador of Israel to Korea Akiva Tor speaks with the Korea JoongAng Daily at the Embassy of Israel in Seoul on Dec. 9. [PARK SANG-MOON]


For an ambassador just a month into the office in a new country, Akiva Tor may have a better mental map of Korea’s capital city than some Seoulites.

“I keep Shabbat, and we’re not permitted to travel by car or by public transport [from sunset on Friday to after sunset on Saturday], so I have been taking these really long walks, five to six hours sometimes,” said Tor, ambassador of Israel to Korea.

These walks would take him from the center of the city, where the Gwanghwamun Gate and palaces are located, through the areas of Itaewon, long known as the international district of the city, and to Gangnam, another downtown area south of the Han River often populated by young adults getting together after work or over the weekend.

“A lot of what I’ve seen on these walks as I passed through different neighborhoods are reminiscent of Israel,” Tor said. “We have beautiful modern buildings, but right nearby are older neighborhoods that were built before Israel was as wealthy as it is today.”

The mix of the old and new in Israel is well known among Koreans, over 60,000 of whom pay a visit to the historic city of Jerusalem every year. Just an hour by car from Jerusalem is Tel Aviv, the tech hub of the region, also dubbed “The Mediterranean Capital of Cool” by the New York Times for its cosmopolitan and lively cityscape.

Tor came to Korea amid a pandemic, but his list of objectives is not any shorter because of it, he says.

The following are edited excerpts of the interview with the ambassador, in which he discusses the ties between the two countries as they pertain to defense, culture, innovation and business.


What are some of your main objectives as ambassador of Israel to Korea in the next few years?
First of all I’d like to say that as a diplomat, I am looking forward to learning a new and fascinating country. I would say that I am primarily looking at how to bring about a deeper synergy between the economies of the two countries. There is incredible opportunity from our perspective, because the Korean economy is really ingenious in terms of its ability to scale up technological manufacturing and global marketing. Israel excels in high-tech innovation and is second in the world after the United States in terms of Nasdaq companies, which are more or less high-tech start-ups.
My job here would be to try to find a way for Israeli innovation to mesh with Korean technological manufacturing and marketing. And that goes with my other task, which is to bring a closer political engagement between the two countries. We had a successful visit by the president of Israel last [year]. We will be trying to have more official visits by senior ministers and heads of states. We also have a robust public diplomacy outreach at the embassy because we want to communicate directly with the Korean society.


One major people-to-people exchange between the two nations has been the visits by over 60,000 Koreans to Israel every year before the Covid pandemic. How is Israel coping with the pandemic and when can Koreans expect to travel to the historic city again?
One of my most immediate tasks at the embassy is to restore direct flights between Israel and Korea and to restore tourism, much of which is Christian tourism. Before Covid struck, tourism was shooting up, going from 25,000 to 40,000 and over 60,000 a year. And we were talking about expanding the three flights a week to five. Now we are at zero.
We won’t be able to achieve this until the borders are open on both sides; both Korea and Israel have restrictions on entrance. But the vaccines are coming, and come spring, as governments will have to act quickly to stimulate a return to the natural rate of tourism. One thing that is making my job easier is the strength of Christianity in Korea, which is unique in Asia, and the deep love for Israel that is felt by very large congregations here. 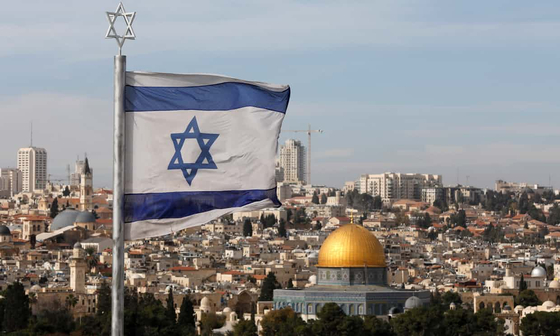 The Korea-Israel FTA, negotiated since 2016, is near its ratification. Once ratified, it will be the first FTA by Israel with an Asian country. What changes will the agreement bring to bilateral trade and investment?
The FTA lowers much of the tariffs on goods — and that becomes very helpful for the Korean side, as we buy a lot of Korean cars and phones. The agreement will also create legal and regulatory platforms which make investment safer, protect international property and create a general investment environment that encourages more synergy between the two economies. But the FTA also has a lot of symbolic significance. It will be Israel’s first FTA agreement with an Asian country. That says a lot about the potential that we see with engagement in Korea.
Our current bilateral trade is some $2.5 billion to $2.7 billion a year. The FTA is expected to increase that by several hundreds of millions of dollars in the course of [the] coming few years.


Israeli companies specializing in defense technology, like Rafael, have been sharing its knowhow on antidrone technology in Korea. Have there been other similar projects on the defense front?
Israel and Korea are sharing technology and platforms, and the defense relationship is very substantial, as it’s in the hundreds of millions of dollars and can really be even more. We share threats which are similar and dissimilar, but we are both democracies with a very significant national security challenge, and it is only logical that we look to each other for defense technologies. 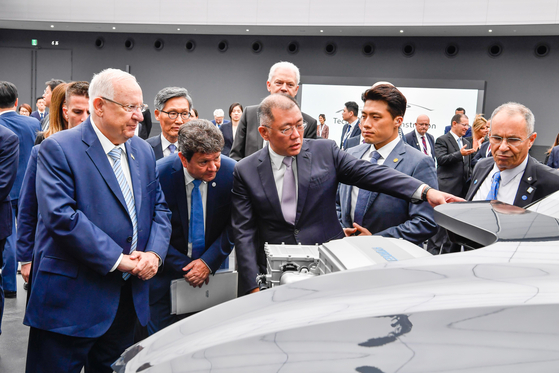 Israel and the United Arab Emirates (UAE) reached an agreement earlier in the year to normalize relations, marking the third time that a country in the Gulf signed a peace accord with Israel. How should the people of Korea understand these agreements?
I think here in Korea, some people in the business sector do not realize that the Arab boycott of Israel is long ago dead. It does not exist. There are sometimes imagined fears about what political, cultural and economic engagement in Israel would mean in terms of ties with the states of the Gulf. It simply is not there. Today we are even talking about trilateral cooperation between Israel, Korea and the UAE, for example, on issues of green energy, and all kinds of technologies that would be relevant, where one side would bring investment, the other side would bring industrial [research and development] and another side would bring innovation and all kinds of high-tech ideas. There is so much this trade triangle could do in the areas of renewables, smart transport, agriculture, desertification and others.


What image did Korea hold for you, in movies, TV shows and books, and have they been countered by your personal experiences in the country?
I knew how modern, efficient, clean and hardworking Korea is. And yet when I actually saw it with my own eyes, I hadn’t expected it to be quite this much. My Korean staff works incredibly hard. Internet connectivity is beyond belief. What I really find endearing about Seoul is this incredible mixture of hyper-modern but also you’ve got a lot of what we would call a balagan of old and new neighborhoods that mesh with quite an interesting harmony.


So you keep Shabbat and adhere to guidelines on kosher. What has that been like in trying cuisines in Korea?
I admit it has been challenging. I’ve had temple food which is excellent. I found a way to eat bibimbap [rice mixed with vegetables] that is kosher. There are many rules, but one that affects me the most in Korea may be shrimp. Consumption of shrimp is not permitted by the kosher laws and that rules out a lot of kimchi that's made using salted shrimps. It is a challenge, but I am not starving.

How does your Jewish identity play into your job as a diplomat?
It is my personal belief that a good diplomat doesn’t only bring their messages from home, but they also bring themselves to the job. And in the case of myself, I am a religious person. So my religious beliefs should not prejudice anything that I need to do or my openness in doing the job, and they don’t, but I’d be making a mistake if I left my beliefs at home. The Bible is my compass. In life, you face complex situations that sometimes require one to walk a difficult line. But you need to know which way is pointed north and which way south. That is what the Bible means for me. It also represents for me rootedness. We’re far from home here, and it’s important to remember who you are. 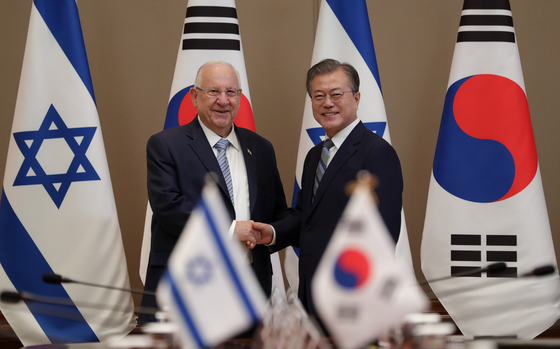 Korean parents are very interested in the study of Talmud. Are there any programs planned at the embassy regarding the text?
My father was a rabbi. I began to study Talmud in grade six and I studied in yeshiva Talmudic academies for two years full-time before my Army service. So I have a fair amount of Talmud under my belt.
Talmud is a text of more than 2,000 pages, two-thirds of which is legal and a third of which consists of legend and folk wisdom. I know that what’s been spoken about a lot here in Korea is the method of Talmud study, chavruta, which is two to three people studying the text together, analyzing the many viewpoints and thinking them through. That works for Talmud because it’s multivocal. The text poses a question and [readers] don’t receive a single answer. We hear a variance of opinions, each of which beckons to be understood.
But I am still learning what Talmud study means in Korea, what about people here wish to learn from this immensely rich text of antiquity. I need to understand this better, and then we will find the right way to do Talmud here.

Both Israel and Korea have mandatory military conscription, and for Israel, it includes women. Have there been pushbacks in Israel regarding the policy?
Military service in Israel is popular. On one hand, it’s forced conscription, and every 18-year-old is drafted into the armed forces. But I think that by and large the Israel youth goes willingly and with a reasonable amount of enthusiasm. It is true that there are sectors in the society who don’t serve, and that has been a source of internal arguments in Israel. But the wider Israeli public approaches the service as something they understand the country needs. Both of my daughters were in combat positions, one was a lieutenant in Israeli artillery and another in infantry. It was tough going at times, but it reflects a level of motivation and willingness to serve, which thankfully is quite prevalent in Israel’s society.