Experts see hope for resumption of dialogue by North

Experts see hope for resumption of dialogue by North 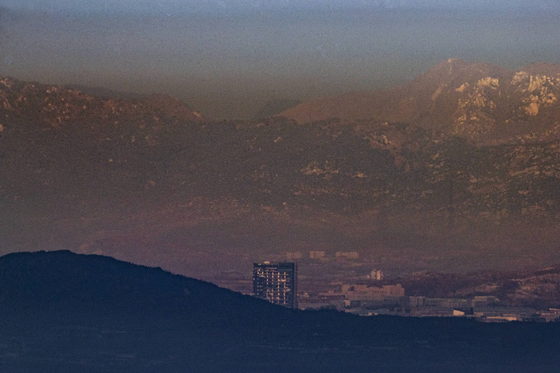 The Kaesong Industrial Complex in North Korea, photographed from the South on Dec. 9. The North unilaterally demolished the inter-Korean liaison office in the area in June. [YONHAP]


North Korea is likely to reverse course next year and again extend an olive branch to South Korea and the United States following its party congress in January, according to multiple government-run think tanks in Seoul.

In a new report published by the Institute for National Security Strategy Monday, senior researchers Kim Il-gi and Lee Soo-seok noted the devastating economic impact of the Covid-19 pandemic on North Korea has increased its need for Seoul's help.

The regime's ongoing lockdown of its borders following on the heels of a mass outbreak in China earlier this year has reduced its access to foreign resources, paving the way for South Korea to step in, the researchers said.

Pyongyang may also try to improve ties with Seoul before South Korean President Moon Jae-in's term runs out in 2022, the report said, noting the North may find a subsequent government in Seoul less disposed to dialogue.

Using the 8th Party Congress — the first party-wide event to be held in the country since 2016 — as an occasion to ease tensions and reopen talks with Seoul, the regime could be hoping to use an inter-Korean rapprochement as a stepping stone to future negotiations with the United States, the report added.

Hong Min, a researcher at the Korea Institute for National Unification (KINU), made a similar prediction in a symposium Tuesday, saying the party congress presented a chance for the North to veer back to dialogue with the a new administration entering the White House.

The regime was unlikely to change its policies regarding the development of strategic weapons, but was also likely to signal a renewed interest in denuclearization in the hope of opening nuclear discussions once again with Washington, Hong said.

Hong's institution, KINU, is the official think tank of the Ministry of Unification, where much of Seoul's inter-Korean exchange ideas are conceived.

As such, the institute has been supportive of the government's conciliatory position on the North, though little of that diplomatic attitude has been reciprocated by Pyongyang within the last year.

The recent passage of a bill banning the distribution of propaganda leaflets to North Korea may be helping to inflate Seoul's hopes of reconciliation early next year.

The new law, which the ruling Democratic Party pushed through the National Assembly Monday despite fierce protests by the opposition, was a response to the North's visceral response to leaflets spread by South Korean activists.

Citing the leaflets' insulting contents about its leadership, the regime in June ramped up its threats toward the South by severing official communications and unilaterally demolishing the inter-Korean liaison office in Kaesong — the most lasting reminder of 2018's rapprochement between the two sides.

Ties have remained frosty since, with tensions reaching new heights when a South Korean fisheries official — allegedly trying to defect — was shot and killed by a North Korean patrol in the North's waters.

North Korean leader Kim Jong-un, however, shortly after sent what appeared to be an apology for the incident — a move that the Unification Ministry has interpreted as the North's desire to keep the possibility of dialogue open.

Time for a reinforced nuclear deterrence