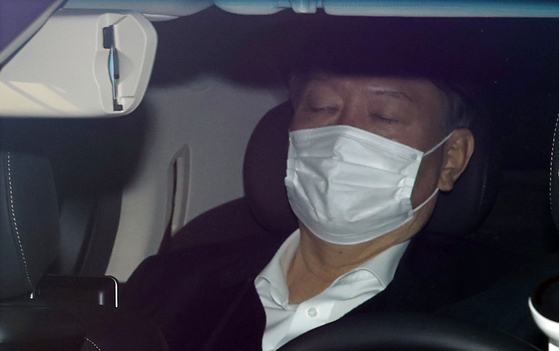 A disciplinary panel of the Ministry of Justice suspended Prosecutor General Yoon Seok-youl for two months on Wednesday.

Yoon said he will challenge the decision on constitutional grounds and with the relevant laws.

The disciplinary committee under the Ministry of Justice convened for the second time in less than a week on Tuesday to decide on a punishment for Yoon. The hearing began Tuesday morning, picking up from an inconclusive session called last Thursday, to decide whether Yoon should be  penalized for six counts of alleged ethical and legal misconduct, including claims that he ordered illegal surveillance of a judge and breached his obligation to remain politically neutral.

The panel took 17 hours and 30 minutes to reach a decision and suspended Yoon at 4 a.m. on Wednesday. After hearing testimony from witnesses and arguments from Yoon's lawyers, the four-member panel concluded that Yoon should be punished with a two-month suspension.

Of the six counts raised by Justice Minister Choo Mi-ae, the committee said Yoon should be held accountable for four charges, including illegal surveillance of a judge and breach of his obligation to remain politically neutral.

Any action stronger than a warning requires an approval from President Moon Jae-in, who appointed Yoon to the office last year. The Blue House has said Moon will sign off on any decision reached by the disciplinary panel.

The administration's approval rating has plummeted over the past month as the feud between Choo and Yoon intensified.

Yoon's lawyer, Lee Wan-kyu, sent a message to reporters on Wednesday morning saying that Yoon will fight the decision.

"They used an unlawful procedure to kick out a prosecutor general, whose tenure is guaranteed by law, and announced an unfair, illegal conclusion based on unsubstantiated reasons," Lee said. "The prosecution's political neutrality and independence and rule of law are seriously damaged.”