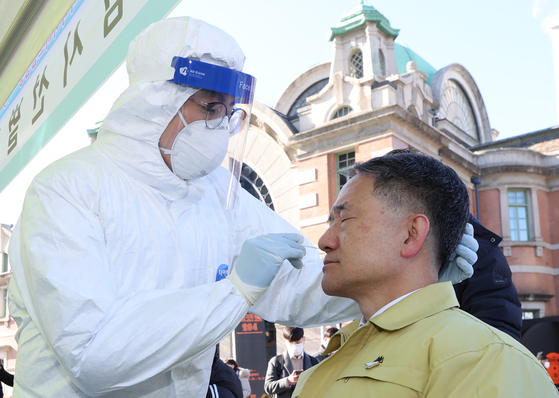 Health Minister Park Neung-hoo receives a rapid antigen test for the coronavirus Wednesday at a Covid-19 testing site at Seoul Station Square in central Seoul. The results turned out negative. The Korean government had until recently refused to use the test on the public, citing possible faulty outcomes. People who test positive on the test must take a follow-up, more accurate PCR test to be diagnosed with the virus. [NEWS1]

But no raising of the level was announced immediately.

The grave new milestone was announced Wednesday morning by the Korea Disease Control and Prevention Agency (KDCA), which said 1,054 cases were domestic infections and 24 cases imported.

The country’s previous daily high was last Saturday’s 1,030 cases. There were 718 new cases on Sunday and 880 on Monday.

Most of Tuesday’s cases came from the greater Seoul area — 373 in Seoul, 320 in Gyeonggi and 64 in Incheon.

All 17 major cities and provinces added a new case except for Sejong City.

The 24 imported cases included seven from the United States, six from Indonesia and one each from the Philippines, Uzbekistan, Russia, Myanmar, Japan, Bulgaria, Hungary, Mexico, Canada, Panama and Morocco.

Twelve patients died Tuesday, raising total deaths to 612, while 388 people recovered, bringing the total number of recovered patients in Korea to 32,947. As of Tuesday at midnight, the country had counted 45,442 Covid-19 cases in all. 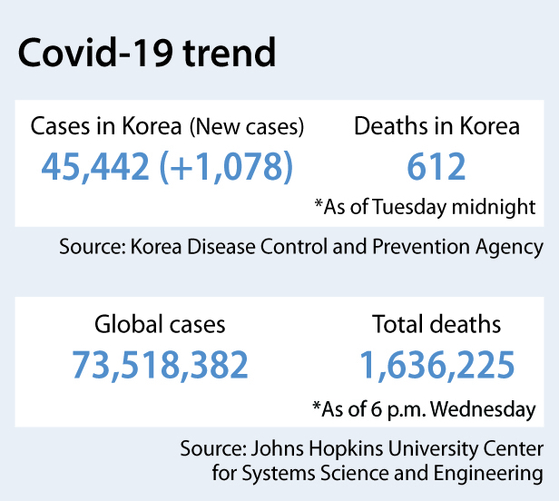 While the central government looks at various factors in deciding a region’s social distancing level, one key criterion is the average number of patients that area — or the entire nation — has seen per day over the previous week.

Based on the central government’s guidelines, Level 3 rules can be enforced when the country sees an average of between 800 and 1,000 new domestic cases per day, or more, over the previous seven days. Imported cases are not considered.

With Tuesday’s cases added, Korea had an average of 833 new domestically infected patients per day over the past week — enough to go into Level 3 for the first time ever.

Health authorities, whom until Tuesday tried to avoid hinting that the central government was seriously considering Level 3, said Wednesday they were planning specific measures with relevant ministries and experts, and offered a rough picture of what Level 3 might look like.

Sohn Young-rae, a spokesperson for the Central Disaster Management Headquarters, said in a Wednesday press briefing that if the central government does declare Level 3, some measures could be harsher than the Level 3 measures that health authorities revealed last month as they were introducing the new five-tier scheme to replace the old three-tier system.

“Many experts are suggesting we take stronger measures than in the [Level 3] social distancing system, such as entirely banning people from eating in restaurants and only allowing take-out services” throughout the entire day, said Sohn.

Sohn continued that authorities were also discussing the option of prohibiting any gatherings of five people or more.

“The third wave is very broad, and we’re seeing many infections in small gatherings of friends and family,” said Sohn while explaining the possible tweaks. “So it’s important to devise measures that would [tackle] these circumstances.”

Sohn said the social and economic damage caused by Level 3 would be “colossal,” which is why it’s very crucial for the public to agree with the restrictions and thoroughly abide by them if they’re imposed.

One chief concern for health authorities now is Christmas, Sohn continued, as he begged the public not to leave their houses. 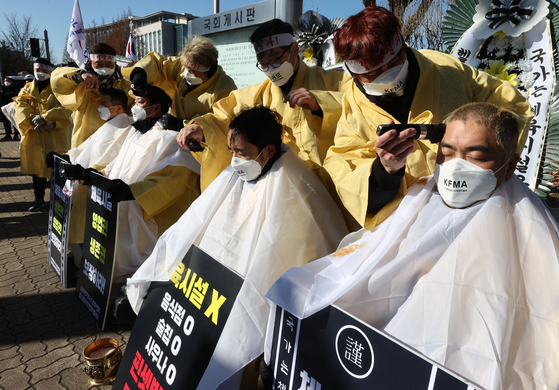 Gym owners and representatives of an association of local fitness center proprietors protest the government’s shutdown orders Wednesday during a press conference in Yeouido, western Seoul, as some shave their heads. Indoor gyms have been forced to close in Level 2.5 social distancing measures. [YONHAP]


In Seoul, where the spread is especially dire, the city government said Wednesday that only one out of 78 I.C.U. beds for coronavirus patients was currently vacant. Acting Seoul Mayor Seo Jung-hyup said the city was in talks with six hospitals to secure 18 more I.C.U. beds by the end of the month, including two that are expected to be available within this week.

While various chains of infections and clusters are popping up throughout the country, officials in Boryeong, South Chungcheong, said at least 20 Vietnamese students studying at Ajou Motor College were diagnosed with the virus this week.

The rare cluster of virus cases involving foreigners was first detected last Monday when a Vietnamese student at the university tested positive, prompting health officials to test all 131 students living in the same dormitory, which included 59 students from Vietnam, seven from Uzbekistan and one from Thailand.

Health officials said it appears the Vietnamese students caught the virus as they were eating together outside the dormitory. Some were said to have worked at restaurants near Daecheon Beach last weekend. The restaurants have been disinfected.