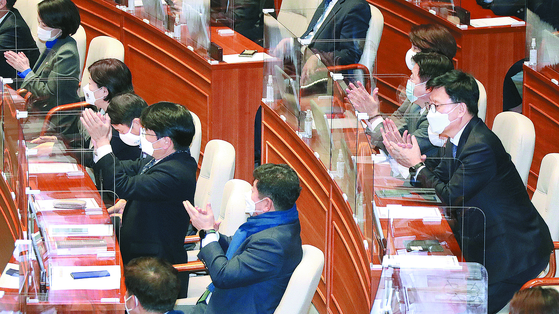 Ruling Democratic Party lawmakers applaud the passage of the controversial revision to the Act on the Corruption Investigation Office for High-ranking Officials in the National Assembly last Friday. ﻿ [OH JONG-TAEK]

“Not inclining to one side and behaving fairly” is the definition of “neutral” in the dictionary on a portal site. It is an easy word, but I looked it up because I am increasingly seeing cases where I doubt whether the word is used correctly.

I impertinently laughed at President Moon Jae-in’s remarks on Dec. 15 as he said, “Political neutrality is the life of the Corruption Investigation Office [CIO] for High-ranking Officials” and “The ruling and opposition parties should work together to help the agency play its role with strict political neutrality.”

When the ruling Democratic Party (DP) passed the CIO Act amid controversies last year, it claimed that a shield against concerns about the possible establishment of a pro-government investigative agency was the method of selecting the agency head. The DP said that anyone opposed by the opposition People Power Party (PPP) cannot become the head as the quorum for the nomination of the chief, is six out of seven nomination committee members, where two go to the PPP.

When the article became an obstacle, the DP passed a revision without any explanation or apology. The revised quorum is two-thirds of the nomination committee members. As a result, there is no way to block a DP figure from becoming the head. It is hard to find “soul” and “common sense” from the president who welcomed this change while emphasizing “political neutrality” and “cooperation between ruling and opposition parties.”

I already have deep suspicion that Moon’s neutrality may mean something different from the dictionary definition. On the surface, he took a strictly neutral stance on the discord between the Justice Ministry and the prosecution, but he actually jabbed at the back of Prosecutor General Yoon Seok-youl. I am confused if the justice minister is the president’s avatar or vice versa. Justice Minister Choo Mi-ae also has peculiar views on neutrality. As Yoon was vague on whether he was entering politics, Choo requested disciplinary action as he violated “political neutrality.”

I also find the prosecutor general’s answer regrettable, but it does not deserve any disciplinary action in my common sense. In the end, common sense was not important after Yoon started probing the Moon administration.

“There are two types of people, the reds and the enemies of the reds. There is no place for neutrality. There is only a choice.” This line from the movie “Joint Security Area” may be the true inner heart hidden in the skin-deep “neutrality” of the president and his avatars.