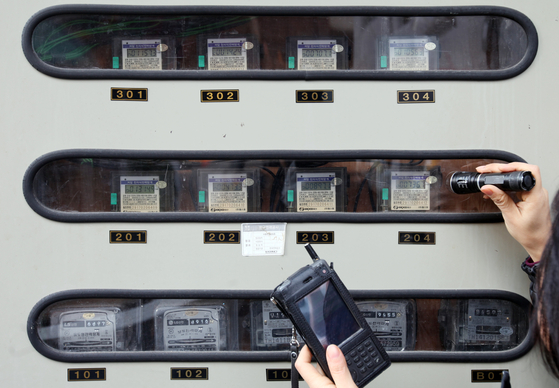 
A new electricity billing system that adjusts to changing international fuel prices will go into effect on New Year's Day.

The new monthly bills will promote the Moon Jae-in government's renewable energy policies by separately describing how much a consumer is paying for those policies and environmental protection.

According to the Ministry of Trade, Industry and Energy and the Korea Electric Power Corporation (Kepco) on Thursday, the new electric bills will be based on average international fuel prices for the previous three months.

That will give consumers a break if they go down, but will cost them if they go up.

Previous electric bills were based on older rates.

The government and Kepco estimated that the new system will not immediately lead to a hike in electricity bills for households due to low crude prices.

A family of four that consumes 350 kilowatt hours of energy in a month will likely receive a bill of 54,000 won next month, which is 1,080 won or 2 percent less than under the current system.

The government projected that total electricity billings in the first half of next year will likely be 1 trillion won less nationwide considering the level of fuel prices in the second half of this year, which have been kept low by the pandemic.

The government said it has ensured a system that would prevent households from facing big rises when international fuel prices spike.

Kepco can only raise or lower charges by 5 won per kilowatt hour compared to the previous bill.

In 2011, the government tried to adopt a billing system that better reflected international fuel prices.

But international crude prices surged beyond $100 per barrel and the plan was scrapped in 2013.

“The implementation of a future-oriented electricity billing system can no longer wait,” said Kepco CEO Kim Jong-kap during a forum held last month on the need to change the billing system.

The new electric bills will show how much the government charges consumers for climate and environment-related expenses.

Previously, those charges were not broken down on the bills. They account for 4.9 percent of current bills, including renewable energy portfolio costs, carbon emission costs as well as the costs of cutbacks in coal-fired power plants.

The government said it wants to raise awareness of its efforts to combat climate change and to make consumers partners.

Asked if those charges could rise in the future, the government acknowledged the possibility.

While the current administration has championed expanding renewable energy, it has also been cutting back on nuclear power generation, which is one of the top two power sources in the country.

“Rising climate environment charges will be inevitable,” said  Kim Jeong-il, the ministry’s director-general for energy innovation policy. “But the government will do our best to minimize those hikes.”

Another concern is the government’s decision to gradually abolish a discount offered to roughly 9.91 million households that uses a minimum amount of electricity by July 2022. The discount was 4,000 won a month.

The government said it decided to end the discount and redirect that spending on helping lower income households.