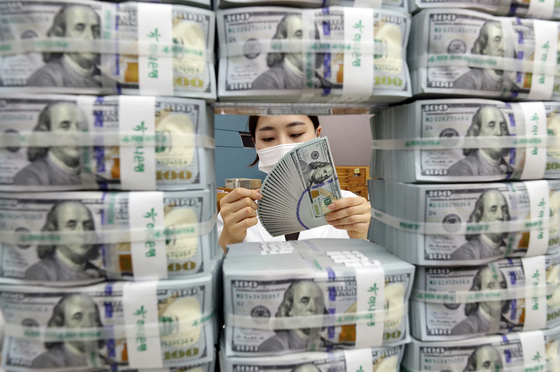 
The swap agreement, which was set to expire on March 31, was extended to Sept. 30. It is the second time the expiration date was extended by six months.

The size and conditions of the agreement remain the same.

"Risk-taking sentiment in the global financial market is being restored and the domestic foreign currency market has been stabilizing. However, [the BOK] concluded the swap line needs to be extended to be prepared for uncertainties spurred by the resurgence of Covid-19," the central bank said in statement.

Since the operation began, the BOK supplied some $19.87 billion to local banks through six bids as of Thursday.

The BOK said it had recovered all the supplied dollars as of July 30.

The bank said it will supply dollars immediately whenever the need arises.

As of Thursday, Korea's central bank has inked currency swap agreements worth some $196.2 billion.

The amount includes bilateral lines with central banks of eight countries including the United States, China and Switzerland. A deal with Canada is not included in the $196.2 billion since it has no limit on liquidity provisions.

Korea is also a part of a multilateral currency swap arrangement among 13 countries including members of Asean as well as China and Japan.

This is Korea's second currency swap agreement with the United States. The first was in 2008 during the global financial meltdown.

Yoon and Biden may discuss currency swap at UN next week