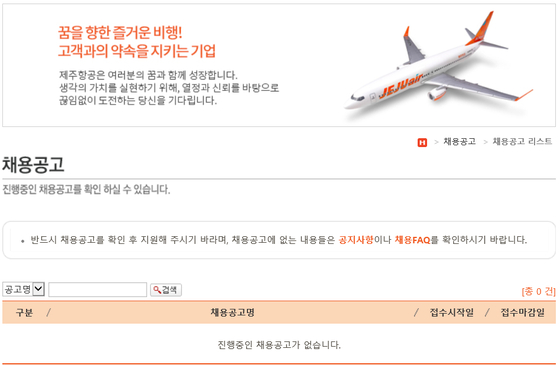 The recruitment page of Jeju Air's official website shows that it currently has no new job offerings. [SCREEN CAPTURE]

One women who was hired by Jeju Air last year has been told that her start date is delayed indefinitely, and now she lives hand to mouth in employment limbo waiting a call that might not come for months, if ever.

It was tough enough just to get the job in the first place.

“I’ve prepared for Jeju Air for over one year. I worked during the day and went to flight attendant academy after work,” she said. “When I finally got a job offer from the company, I felt like I achieved everything.”

"But the company abandoned me because of the invisible future."

She received word of acceptance on Dec. 5 last year. But during an orientation for new employees a few days later, she was told that her start date has been delayed.

“The team manager told us that the start date has been delayed to April because the company was chaotic due to the acquisition of cash-strapped Eastar Jet,” she continued. “The company told us we can get prepared by March and enter the company by April.”

But on March 30, she received another announcement from Jeju Air that the start date has been delayed again due to the company’s financial situation amid Covid-19. It had been pushed to October.

“At the time, I could understand the company’s situation and really wanted to overcome the situation that was caused by the coronavirus,” she added. “I got a part-time job to make a living. I waited for another call from the company, but it didn’t reach me for another seven months.”

On Oct. 13, Jeju Air held a video conference with its 24 new employees and announced that their start date has been postponed indefinitely. As they didn’t sign contract with the company yet, they were not qualified for relief grants from the government.

“I have no idea when Jeju Air will call me again, and I’m just so afraid of looking for another job opportunity when the employment rate is so low at the time,” she added. “All flight attendants who were hired by Asiana Airlines during the same period with us have signed a contract with the company and are taking unpaid leave. I hope I can be like them and at least legally become an employee of Jeju Air.”

New flight attendants of Asiana Airlines are currently taking unpaid leave and are receiving relief grants from the government as they signed a contract with the company.

The situation is no different at Korean Air Lines.

The carrier recruited roughly 70 new employees last year. They have been waiting for the announcement of a start date.

They are likely to get a call from the company by the beginning of the next year, according to Korean Air Lines.

“We are banned from hiring new employees when we are receiving government financial aid,” Korean Air Lines President Woo Kee-hong said during a press conference on Dec. 2. “We will discuss with the Ministry of Employment and Labor soon so that they can officially enter the company by the beginning of 2021.”

Jeju Air has received financial support from the government over the past eight months, and it is likely to apply for additional aid next year. If it applies in January, it will receive the support until the end of August. This means that the 24 new employees cannot sign contracts with the company at least until the second half of next year.

“There’s nothing that the company can do for the new employees at the moment when our existing employees are even taking unpaid leave,” a spokesperson for Jeju Air said, “We are waiting for the day when the Covid-19 pandemic ends and the airline industry can look forward an economic revival.”