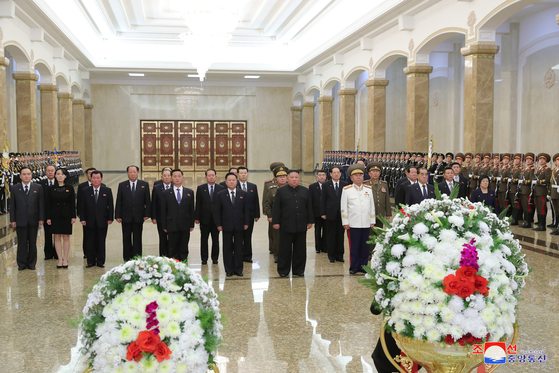 North Korean leader Kim Jong-un, third from left in front row, and his top cadre, including his younger sister Kim Yo-jong, second from left, on Thursday pay tribute to their father and former leader Kim Jong-il on the ninth anniversary of his death, as shown in a photograph from state media. The ceremony took place at the Kumsusan Palace of the Sun, where Kim Jong-il and his father Kim Il Sung's bodies are laid in state. [YONHAP]

Surrounded by his top cadre, including his younger sister Kim Yo-jong, a rising figure in the party, the dictator paid tribute to the statues of his father Kim Jong-il and grandfather Kim Il Sung, the regime’s founder, according to the official Korean Central News Agency (KCNA).

The occasion of the “greatest national memorial day,” as the KCNA called it, marked the ninth year since Kim Jong-il died of a heart attack while traveling on his private train near Pyongyang in 2011.

Kim Jong-un, who before then had been untested and known to the public for only around a year, was proclaimed the new leader immediately afterwards.

The anniversary of Kim Jong-il’s death is deeply revered in North Korea, where a ubiquitous cult of personality exists around its ruling Kim family. The occasion is always marked by a visit from Kim Jong-un to Kumsusan Palace of the Sun, where his two predecessors are laid in state.

The regime held lavish state memorial ceremonies to mark the first, second, third and fifth anniversaries, but commemorations appear muted this year amid the Covid-19 pandemic.

The Rodong Sinmun, North Korea’s official party newspaper, carried tribute articles to the former leader on its front page, but there were no reports of any other ceremonies.

Instead, the country appears to be concentrating its efforts on preparing for the upcoming 8th Party Congress in January — the regime’s biggest political event, last held in 2016.

The agenda and schedule for the event have not yet been made public, but North Korea watchers around the world speculate Pyongyang is gearing up to announce a new economic plan to make up for the failures of the last.

The need for a turnaround — at least on the surface — has been especially pronounced in light of the trifecta of disasters that befell the country’s economy this year.

With external trade and exchanges greatly diminished as a result of a Covid-19 lockdown and extended international sanctions, a series of natural disasters over the summer further dampened public spirits.

And a strengthened indoctrination campaign aimed at rooting out capitalist ideologies testified further to the regime’s anxiety about growing public discontent.

Pyongyang is also expected sometime early next year to relay some sort of signal to the incoming Biden administration in Washington, which will take over from a White House that has given the North unprecedented acceptance in the form of three summits.

According to a Reuters report from Wednesday, advisers of the president-elect “predict a sterner approach” to Pyongyang in terms of stepped-up sanctions enforcement.

But analysts warn the new administration’s early signals to the regime are critical, as too strong of a message could prompt Pyongyang to respond with a major provocation.

Sue Mi Terry, a senior fellow and Korea chair at the Washington-based Center for Strategic and International Studies (CSIS), noted in a JoongAng Ilbo-CSIS forum Tuesday that Biden’s “immediate priority should be preventing the North from going down” the path of nuclear provocation by presenting a deal akin to that presented to Iran during the Obama years.