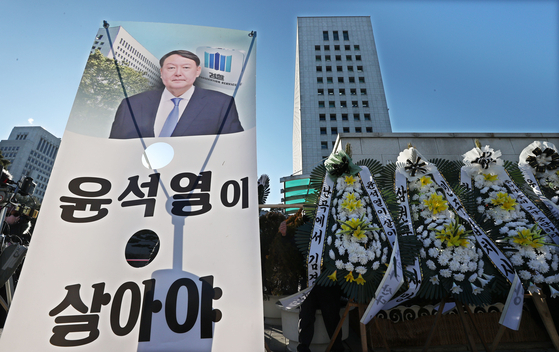 Flowers and a sign supporting Prosecutor General Yoon Seok-youl are placed outside the Supreme Prosecutors' Office on Thursday. [YONHAP]

“We will submit a request to the Seoul Administrative Court today,” Lee Wan-kyu, Yoon’s lawyer, said Thursday. “Because it is hard to submit the petition during business hours, we will likely do so later in the day using an electronic system.”

Yoon will also start working on a separate lawsuit to reverse the disciplinary action.

A disciplinary panel of the Justice Ministry issued a two-month suspension for Yoon on Wednesday, declaring him guilty of four counts of ethical and legal misconduct, including ordering illegal surveillance of a judge and violating his duty to maintain political neutrality. Later in the afternoon, Justice Minister Choo Mi-ae visited the Blue House and recommended the suspension to President Moon Jae-in.

The Blue House also said Justice Minister Choo offered her resignation to Moon during the Wednesday meeting. Moon had not accepted the resignation as of Thursday.

Yoon’s lawyers said Choo’s offer to resign will not influence their plan to challenge his suspension. Last month, Choo started the disciplinary process by accusing Yoon of six different ethical and legal breaches.

At the time, she also used her power to suspend Yoon, but Yoon appealed to the Seoul Administrative Court and won an injunction. He returned to his post after one week.

It was not the first time that Yoon was suspended by a president. In 2013, the Park Geun-hye administration suspended Yoon for one month. At the time, Yoon was heading a special team probing suspicions that the National Intelligence Service had operated a cyber campaign to support Park’s presidential campaign in 2012. During a National Assembly audit, Yoon made the bombshell revelation that his bosses ordered him to shut down the probe.

Yoon was removed from the investigation, demoted and suspended from duty for one month. He was assigned to lesser posts outside Seoul for years, until he made a comeback by joining the independent counsel team investigating Park’s abuse of power and corruption in 2017.

A ruling party lawmaker, Rep. An Min-suk of the Democratic Party, criticized Yoon’s decision to fight the suspension. “He is apparently sending a message that he will fight the president," he said in an interview with the Buddhist Broadcasting System. “Now, this battle will be between Moon and Yoon.”

An said Yoon should have apologized for misconduct and stepped down. “Moon is actually a very fierce person, although he may seem gentle,” An said. “I don’t think Yoon can win against the people who want prosecutorial reform and the president.” 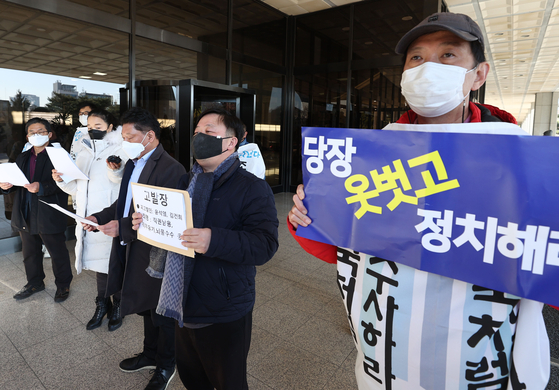 Liberal civic groups hold a press conference outside the Seoul Central District Prosecutors' Office on Thursday, announcing that they are filing a criminal petition to investigate Prosecutor General Yoon Seok-youl on charges of abuse of power and dereliction of duty. [YONHAP]


Meanwhile, Rep. Choe Kang-wook of the Open Minjoo Party on Thursday made public a summary of the disciplinary panel’s grounds for finding Yoon guilty. Choe is a former presidential secretary of the Moon Blue House.

Choe posted the summary on Facebook. According to the post, the panel concluded that each of the four counts of misconduct for Yoon were serious enough to warrant his dismissal. The panel, however, decided to issue a two-month suspension because of the unprecedented circumstance of punishing the prosecutor general.

The panel ruled that Yoon violated his duty to maintain political neutrality because he did not flatly deny the possibility at a National Assembly audit that he would have a political future after his tenure as prosecutor general. Yoon’s two-year ends in July next year.

The panel said Yoon made no additional effort, since his first in August, to request polling companies to exclude him from surveys on who should be the next president, although his popularity was ranked the highest among all presidential contenders on Nov. 11.

The panel also ruled Yoon guilty of ordering illegal surveillance of a judge, although Yoon’s lawyers have said collecting information about a judge is an ordinary part of the prosecution’s job. The lawyers said prosecutors collect information such as a judge’s background and prior rulings from open databases because it helps them better argue cases.

Prosecutors condemned the panel’s reasoning. “They made the ruling not based on objective facts but based on assumptions and presumptions,” said a prosecutor. “How can they use such sloppy reasons to punish the prosecutor general of this country?”

A senior prosecutor also said Choe could be sued for making public charges against Yoon.

“Since the case of former Justice Minister Cho Kuk, the Justice Ministry established a new rule that a suspect’s charges cannot be made public,” he said. “They, however, made public Yoon’s charges because they want to use them politically."