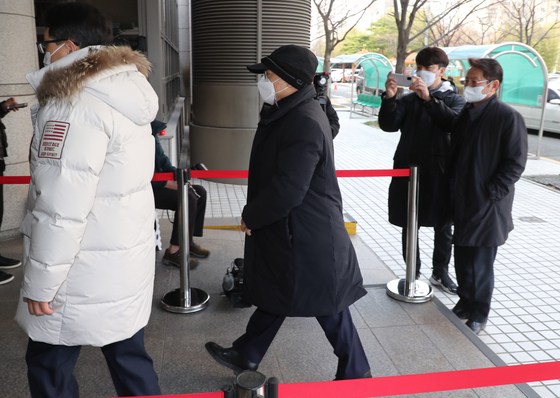 Former Busan Mayor Oh Keo-don steps into a warrant hearing for his arrest on Friday. The court turned down the request. [SONG BONG-GEUN]


A Seoul court on Friday turned down a warrant request for the arrest of former Busan Mayor Oh Keo-don after prosecutors brought forward another allegation of sexual assault against him.

Oh, who was elected in 2018 as a member of the ruling Democratic Party, stepped down as Busan mayor in April after admitting during a live press conference he had sexually assaulted a City Hall employee in his office.

Earlier this week, prosecutors filed a second arrest warrant for Oh after the first request was turned down in June. Prosecutors said they had found new evidence Oh had inappropriate contact with another woman by touching her chin, and attempting to touch other areas of her body on multiple occasions in November and December 2018.

Oh admitted in April to the sexual assault that led to his resignation. At his court hearing Friday, he admitted to the additional assaults, saying “the words of the women are all correct.” The ex-mayor added he did not remember the incidents, but that he apologizes for them.

The presiding judge of the Busan District Court who reviewed Oh’s warrant hearing said there was no reason to put him under pretrial detention as he has accepted the charges and does not pose a flight risk.