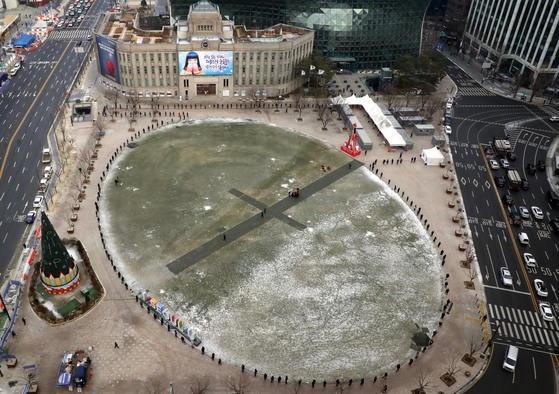 People line up in front of Seoul City Hall on Friday to receive Covid-19 tests at a Jung District makeshift testing center. [YONHAP]


With more than a thousand new Covid-19 cases detected for the third day in a row on Thursday, officials are mulling Level 3 social distancing measures, the most restrictive level in the government’s virus containment program.

The Korea Disease Control and Prevention Agency (KDCA) announced Friday morning the country added 1,062 new cases of the coronavirus the day before, up from 1,014 cases on Wednesday.

That puts the total number of infections at 47,515.

While Seoul accounted for the lion’s share of new cases, at 393, infections continued to be reported in all provinces and metropolitan area across the country.

Only 26 of the new cases were imported., with 13 from the United States, seven from Indonesia, two from Germany, and one each from Myanmar, Japan, South Africa and Australia.

A total of 11 new fatalities from Covid-19 were reported, down from a daily record of 22 the day before. This put the total number of deaths at 645.

Though new infections remaining above 1,000 per day meets the government’s criteria for elevating social distancing measures to Level 3, authorities remain wary of the dramatic effect the measures would have on the economy, particularly small businesses.

The five levels are Level 1, 1.5, 2, 2.5 and 3. Seoul, Incheon and Gyeonggi are currently subject to Level 2.5 restrictions, while most of the rest of the country is subject to looser Level 2 rules.

“Sufficient social consensus” needed to be reached before the step was taken to impose Level 3 guidelines, Prime Minister Chung Sye-kyun said on Friday.

“If social distancing is raised to Level 3, around two million businesses and facilities will need to either shut or will have their operations restricted,” Chung continued. “While we will prepare thoroughly, we will make a decision boldly when we feel it is necessary.”

Should restrictions be raised to Level 3, officials are considering an adjustment to some of the original guidelines.

According to Sohn Young-rae, a spokesperson for the Central Disaster Management Headquarters, on Friday, talks are in place to ban eating indoors altogether under Level 3, allowing restaurants to only offer deliveries or carry out orders.

All public facilities, like movie theaters, wedding halls, hair salons, PC cafes and stores, save for pharmacies, may be mandated to close. Supermarkets and convenience stores will be allowed to sell necessities, but restrictions will be imposed on how many customers will be able to visit these stores at a given time, Sohn said.

The priority remains to properly enforcing the guidelines in place now, the prime minister said. Several businesses were attempting to skirt health guidelines by changing their business types on paper, acts which “can never be tolerated,” Chung added.

As the government dallies on upping restrictions, a rapidly swelling caseload is putting immense strain on hospitals and medical facilities.

According to Gyeonggi officials, only two ICU beds remain available in the province, with all 47 others occupied by coronavirus patients. Seoul faces a similar situation, with 77 of its 78 beds occupied, said the capital’s acting mayor on Wednesday.

Gyeonggi further reported around 87 percent of all beds at Covid-19 treatment centers are in use, while 251 people remain on waitlists for openings at hospitals. Most such patients are in serious condition, officials said.

In Bucheon, Gyeonggi, three patients died while in quarantine waiting for hospital openings this week, all of them over the age of 70. On Tuesday, a man in his 60s living in Seoul died after waiting for a bed.

Health officials on Friday addressed public anxieties about whether the country would be able to secure a sufficient number of Covid-19 vaccines amid a global inoculation rush following authorizations granted in the United States and other countries to vaccine candidates made by U.S. drug makers Pfizer and Moderna.

Korean authorities earlier announced a plan to obtain at least 44 million doses of foreign-made vaccines for inoculation programs starting in February or March next year.

So far, the government has only signed a contract with the British pharmaceutical company AstraZeneca for 10 million doses.

Lim brushed aside concerns raised by several media outlets that U.S. President Donald Trump’s executive order prioritizing vaccine supplies for the United States would diminish Seoul’s chances of receiving doses on time, stressing U.S. and drug makers from other countries have said they would provide the vaccines regardless of the executive order.