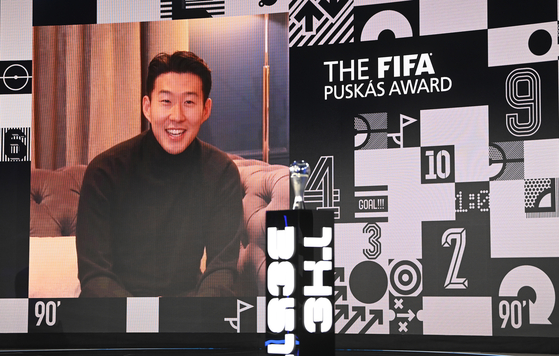 
It's official, Son Heung-min's wonder goal against Burnley FC last year was the best goal by any man or woman playing in any league anywhere in the world.

Son of Tottenham Hotspur won the 2020 FIFA Puskas Award on Thursday night, an annual prize recognizing the "best goal scored during the period from 20 July 2019 to 7 October 2020 inclusive, regardless of championship, gender or nationality."

By winning the honor, Son became the first-ever Korean footballer to win the award and only the second Asian player in history to do so.

Son was nominated for his goal against Burnley last season. The legendary solo effort saw Son pick up the ball on the edge of the Spurs' penalty area and run the entire length of the field on his own, weaving his way through the Burnley defense before hammering it home. Spurs went on to win the game 5-0.

"The goal showcased everything that has led Tottenham Hotspur fans to fall in love with their Korean star, with pace, power, persistence and clinical finishing all on show," said the official announcement on the FIFA website.

It also quoted former England and Spurs star Gary Lineker, who is now a top football pundit, describing the goal as “one of the greatest individual goals you’re ever likely to see”


Son accepted the award remotely on a live video link with the virtual FIFA award ceremony.

"I received the ball in my own box," Son said, "and I couldn't find any option to pass. I started to dribble and after two seconds I was in front of the goal. I was really surprised."

Son joked that it was his teammates' fault that he wasn't to pass the ball earlier and described the goal as "beautiful.

As soon as Son received the award, Spurs’ head coach Jose Mourinho also congratulated his player by posting a video on his instagram.

Son received his award right after he scored his 11th league goal, or his 99th career goal for Spurs, during Spurs’ Premier League match against Liverpool on Wednesday. Although Spurs lost the match 2-1, Son managed to score another goal to tie for the lead in the EPL’s goal standing, along with Dominic Calvert-Lewin of Everton and Mohamed Salah of Liverpool.

Son will have a shot at scoring his 100th goal on Sunday, during Spurs’ Premier League match against fourth-ranked Leicester City at Tottenham Hotspur Stadium. The match will kick off at 11:15 p.m. on Sunday, Korea time.