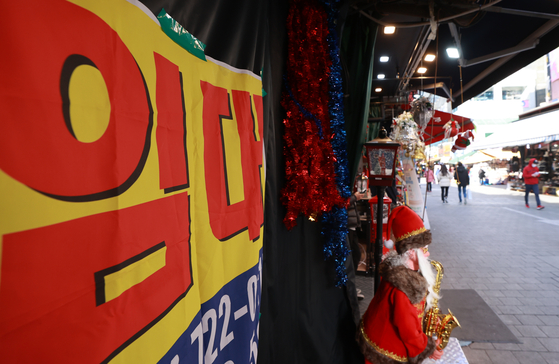 A store in Namdaemun Market in central Seoul on Dec. 18 displays a vacancy sign with few visitors due to the pandemic. [YONHAP]

The move comes as more smaller merchants and self-employed people are facing financial trouble due to the government's order to suspend their businesses amid the protracted pandemic.

The country is preparing to provide more than 3 trillion won ($2.79 billion) in a third round of emergency handouts in January.

"As the third wave of the pandemic has had a far-reaching fallout on the economy, the scope of affected people has also expanded," a Finance Ministry official said. "As calls for rental assistance for smaller merchants mounted, we are looking into the details."

Smaller merchants and the self-employed have been hardest hit by the pandemic as people have refrained from visiting stores or dining out.

Currently, the country provides tax credits on 50 percent of cuts in rental fees to landlords who reduce rents.

If this kind of support is factored in, the amount of the emergency relief funds to be doled out in January may rise to at least 4 trillion won.

The DP also thinks another supplementary budget may be needed early next year if new virus cases are not brought under control.

Korea is mulling whether to raise its social distancing guidelines to Level 3, the highest in its five-tier scheme, as virus cases continue to increase.

This year, the country drew up four rounds of supplementary budgets totaling 67 trillion won. Next year, the government plans to frontload 63 percent of the nation's spending in the first half to prop up the economy.