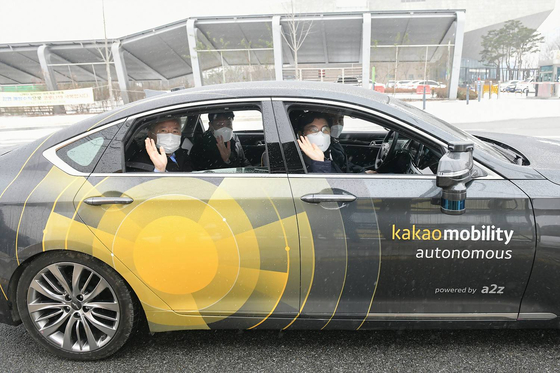 
Kakao Mobility is offering self-driving vehicle rides near the government complex in Sejong City, with users able to reserve a car via a mobile app, the company said Sunday.

Launched Friday, this is the first time that autonomous vehicles have been available for reservation via an app. Booking a car and paying for it can both be done through the Kakao T Platform, the same mobile app used to hail a taxi.


The launch was made possible after a new law went into effect in May this year which allowed self-driving vehicles to be used for paid journeys in specific areas.

The vehicle used for the Kakao Mobility service is a sedan, but despite appearances, it operates more like a shuttle bus than a taxi. On Friday, two self-driving cars started operating on a 4 kilometer (2.5 mile) route with three designated stops where users can be picked up and dropped off.

Potential customers are also limited to mostly government workers, as well as a few select Sejong residents, as chosen by the city government. A maximum of two people can travel at one time, and each vehicle will still have a human driver behind the wheel — an engineer from local start-up Autonomous A2G — who will monitor the system, conduct research and grab the steering wheel if necessary.

“With the ongoing Covid-19 pandemic, we don’t think it would be possible to greatly expand the service in the near future,” said a Kakao Mobility spokesman. “But we do plan to increase the number of operating vehicles, regions and the scope of users.”


Autonomous A2G was Kakao’s partner in the development of the self-driving software. The two-year-old start-up develops technology that handles everything from perception to control of autonomous vehicles. Kakao’s role was to take charge of developing the service platform for reservations on its existing mobile app.

By the first half of 2021, the IT company will introduce a paid service using an autonomous vehicle purely produced by its own technology, it said.

“This service is the start in fine-tuning the service aspects that can be combined with self-driving technology,” said Chang Sung-wook, Kakao Mobility’s managing director.

“We plan to partner with companies in and outside the country that could fast-forward the commercialization of services using autonomous vehicles through Kakao T.”