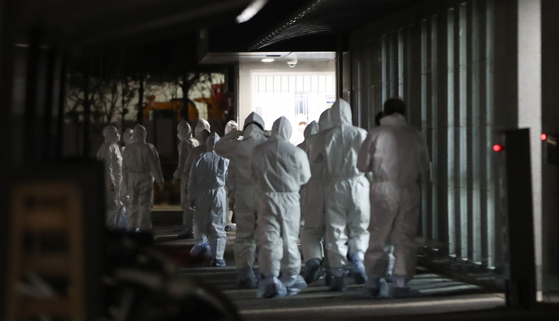 A record number of 1,097 people tested positive for the coronavirus Saturday as new clusters emerged from all corners of the country.

Among Saturday’s total cases, 1,072 were domestic infections and 25 imported, according to data from the Korea Disease Control and Prevention Agency (KDCA) released Sunday morning. Most were from the greater Seoul area — 470 in Seoul, 244 in Gyeonggi and 62 in Incheon.

Out of the nation’s 17 major cities and provinces, Sejong City was the only region that didn’t add a single new case Saturday.

Regarding imported cases, six were from the United States, three each from Indonesia, Russia, Poland and Mexico, two from the Philippines and one each from Kyrgyzstan, Ukraine, Switzerland, Britain and Brazil.

Fifteen people died Saturday, raising total deaths to 674, while 388 patients recovered, bringing that total to 34,722. As of Saturday at midnight, Korea had counted 49,665 coronavirus patients in all.

Despite the current wave of infections showing no signs of ebbing, health authorities Sunday still didn’t make any direct mention of Level 3 social distancing measures going into effect soon, only saying that relevant ministries were discussing the issue.

While on a KBS news segment Sunday morning, Prime Minister Chung Sye-kyun warned that small business owners would suffer immensely in Level 3, which is why the central government is trying to make sure they would receive financial help in case Level 3 restrictions are imposed. Such aid packages are currently being prepared by the Ministry of Economy and Finance, Chung said. 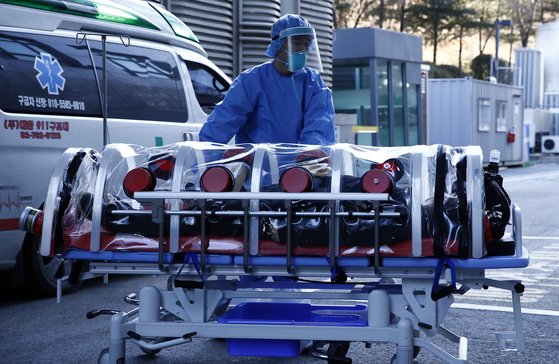 A Covid-19 patient arrives at the National Health Insurance Ilsan Hospital on Sunday after the hospital announced it would set aside 107 beds on its 10th to 13th floors for patients with moderate to severe symptoms. [YONHAP]


On criticism that Korea is lagging behind other countries in securing enough Covid-19 vaccines, Chung explained that the country used to see only about 100 cases when it launched its vaccine taskforce last July, which is why health authorities had “focused more on preventing the spread of the virus, rather than relying on a vaccine” to do the job.

In comparing Korea with the United States and Britain, both of which began inoculations this month, Chung said it was obvious they were first in line because they funded drug companies’ research developing the vaccines, whereas Korea didn’t.

So far, the Korean government has only signed a preorder deal with AstraZeneca to receive doses sometime in the first quarter of 2021. The prime minister said there was hope Koreans may start getting vaccinated next February, but admitted there was no telling when the shots would actually arrive.

Hopes that the spread of the virus would fade soon, on the other hand, remain next to none, as new clusters continue to pop up all over.

At least 185 infections were traced to a Seoul prison over the last weekend where former President Lee Myung-bak is serving a 17-year sentence for corruption.

Lee was tested but turned out negative, officials said.

How the virus got into the Seoul Dongbu Detention Center in Songpa District, southern Seoul, is unknown. 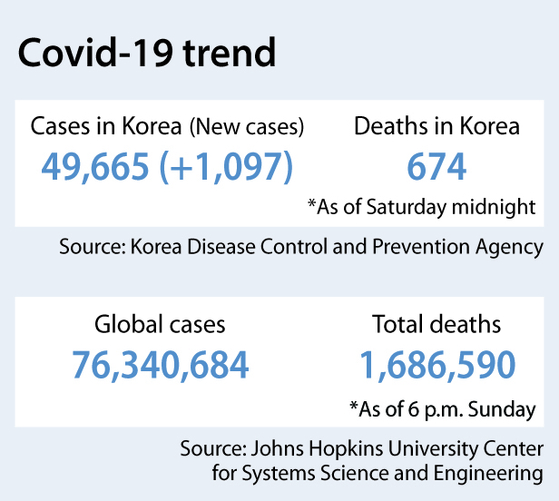 Health authorities said cases have been climbing since a worker at the prison was first diagnosed on Nov. 27. By last Wednesday, at least 15 other workers and a former prisoner tested positive. On Friday, a virus test was administered on every worker and prisoner inside the facility, and one worker and 184 other prisoners additionally turned out positive.

In total, 202 people connected to the prison have been diagnosed so far.

In Cheongju, North Chungcheong, 110 kilometers (68 miles) south of Seoul, at least 57 Covid-19 patients have been traced to a nursing home, mostly older people who had been living there. Another cluster of 30 patients emerged from a nearby hospital in Eumseong County.

In Donghae, Gangwon, 23 people at an elementary school tested positive for the virus, including 21 students.

Yoon Hee-suk, a spokesman for the main opposition People Power Party (PPP), also tested positive Saturday evening after he got a call from an acquaintance whom he met five days earlier that he might have transmitted the virus, the party said. No lawmakers from the PPP have caught the virus from Yoon so far.

With daily coronavirus cases surging, so have patients in severe or critical condition, leading to a shortage of I.C.U. beds across the country. For the first time, the central government issued an administrative order to local government offices last Friday demanding they secure more I.C.U. beds from their respective area’s national university hospitals and general hospitals.

As of Saturday, the Central Disaster Management Headquarters said there were only 38 I.C.U. beds left out of the country’s total 575, while in some regions like North Chungcheong, South Chungcheong, North Jeolla and North Gyeongsang, there wasn’t a single I.C.U. bed free.

There were 278 patients in severe or critical condition as of Saturday midnight, nearly 100 more than the previous week.

In Seoul, a man in his 60s in Guro District, western Seoul, died Saturday night while waiting for a hospital bed, though it wasn’t immediately clear whether he had underlying conditions.