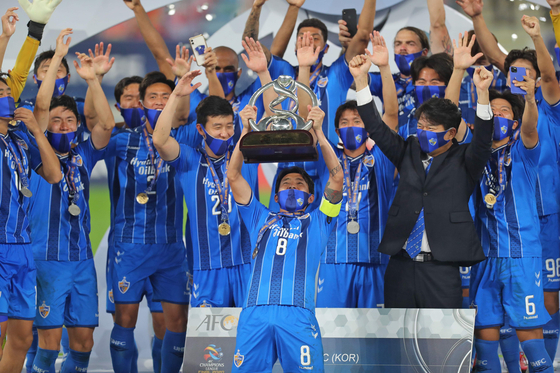 Ulsan beat the Iranian side 2-1 at Al Wakrah Sports Complex in Qatar to win their second Champions League title and take the sixth win for a Korean side.

Persepolis had a two-month break ahead of the final due to the protracted knockout stage that saw the entire field split in two due to increased social distancing measures. The long rest didn't seem to have helped the Iranian side, who were immediately on the defensive as Ulsan piled on the pressure from the kickoff.

Despite the offensive onslaught, Ulsan were unable to break through the Persepolis defense. It wasn't until the very end of the first half that the silence was broken, with Persepolis' Mehdi Abdi Qara stealing the ball from Ulsan defender Park Joo-ho and hammering it home to take the game to 1-0 in the 45th minute.

Ulsan surged forward as the game resumed for the first-half injury time, piling up the players in the opposition box in an attempt to break through by sheer weight of numbers. A bad tackle brought down Yoon Bit-garam in the box, and once again Ulsan's chances came down to Júnior Negrão's ability to convert from the penalty spot.

This time it wasn't Negrão's penalty that tied the game, but the shot that came immediately after it. Persepolis goalkeeper Hamed Lak was able to get his hands to the penalty, but Negrão was there to slot the deflection home, tying the score at 1-1 at half time.

The start of the second half saw the exact same scenario play out, only this time he didn't miss.

Ulsan were awarded their second penalty in the 55th minute of the game after a ball-to-hand inside the Persepolis box. This time Negrão beat Lak to slot the ball home, giving Ulsan a 2-1 lead. The goal was the Brazilian striker's seventh of the competition, tying for top goalscorer across the tournament.

Persepolis went on the offensive for the last 35 minutes but never found the net, leaving Ulsan to lift the AFC Champions League trophy with a 2-1 win.

Ulsan ended the tournament undefeated throughout. After picking up a 1-1 draw against FC Tokyo in February, Ulsan won nine consecutive games after the tournament resumed in November to take the title. The nine-game winning streak that took them to the very top of Asian football also rounds off the tenure of manager Kim Do-hoon, who finished his four-year contract this year.

Champions League glory offers some redemption to a side that has struggled to pick up trophies in domestic contests recently. Ulsan finished second in the K League 1 in both the 2019 and 2020 seasons, and lost the FA Cup final to Jeonbuk in November. Ulsan have won the continental title once before, in 2012.

As well as taking the title, Ulsan also won the AFC's Fair Play Award, while Yoon Bit-garam was named the tournament's most valuable player.