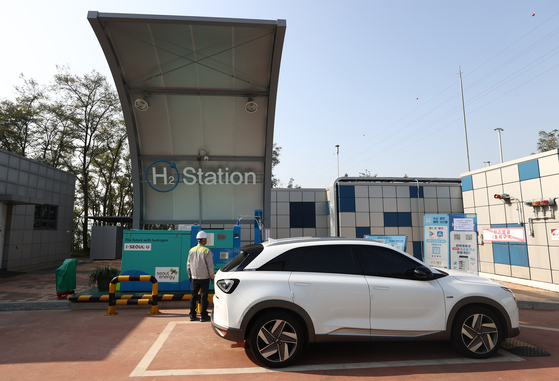 A hydrogen car fueling station in Sangam, Seoul, that was opened in October 2020. [YONHAP]


The government will install 12 hydrogen charging stations before the end of this year and set up another 110 in the first half of next year.

Additionally, the government will lift regulations including allowing all diseases to be used for genetic treatment research while creating a guideline for health and medical data use in hopes of boosting the Korean bio and health industry.

“Corporate earnings on system semiconductors have reached an all-time high while electric vehicle [EV] and hydrogen cars’ global market share expanded significantly. Bio and health exports, when compared to the same period a year ago [as of the third quarter this year], have grown 34 percent,” Finance Minister Hong Nam-ki said during a government meeting on Monday.

“Next year will be a more important year. We will create the foundation that will allow foundry, among system semiconductors, to become the world No. 1, become the world’s leading production country for EVs and hydrogen cars and raise K-bio as one of Korea’s top five export industries.”

The finance minister stressed that to ensure Korea becomes No.1 in the world in the “big three” industries, the government has expanded its budget from 3.1 trillion won ($2.8 billion) to 4.2 trillion won for next year, a 37-percent increase.

The finance minister especially decided to push strongly on expanding the infrastructure that would bolster environment-friendly vehicles.

“Setting up charging infrastructure is urgent more than anything else in spreading the distribution of environmentally-friendly vehicles,” said Hong. “We plan to focus especially on hydrogen cars, which have fallen behind of our initial goal to create 100 stations by the end of 2020.”

On system semiconductors, the government has decided to work with local governments to swiftly establish semiconductor production facilities while expanding tax benefits on R&D spending. The government is applying a tax deduction between 20 percent to 40 percent, higher than the general R&D deduction of a maximum 25 percent.