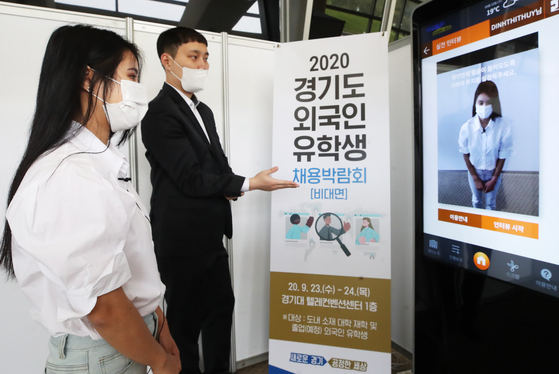 A foreign student recording a video interview during a job fair held at Kyonggi University in September. [YONHAP]


Jobs for foreign workers in factories have been badly affected by the Covid-19 pandemic, the latest job figures showed, while the unemployment rate rose to an all-time record.

That figure could get worse as the study reported Monday was conducted in May — before two waves of infections.

According to Statistics Korea on Monday, there were 848,000 foreigners working in Korea as of May, down 15,000 or 1.8 percent from a year earlier.

The employment rate for foreigners in Korea was 63.7 percent, 1.6 percentage points lower than a year earlier and the lowest figure since data started being compiled in its current form in 2012.

It was the first time for unemployed foreigners to hit 70,000.

As a result, the unemployment rate for foreigners was 7.6 percent, up 2.1 percentage points year-on-year, the highest since data has been compiled in its current form.

Manufacturing topped the list for losses of jobs for foreigners at 21,300. That’s a 5 percent decline in employment in that sector year-on-year. The construction industry trailed with 9,500 losses, a 10 percent decline.

Foreigners working in wholesale and restaurants and accommodation dipped 0.1 percent, which translates to 100 jobs being lost.

“Roughly 45 percent of foreigners working in Korea work in manufacturing,” said Chung Dong-wook, head of the statistics agency’s employment stats. Chung said the decline in manufacturing was largely due to major economies locking down due to Covid-19.

Foreigners working in wholesale, retail, restaurants and accommodation numbered 164,000, which accounted for 19.4 percent of all foreigners employed.

The study showed that as of May, the number of foreigners aged 15 or older living in Korea amounted to 1.33 million, which was 9,000 more than a year ago, or a 0.7 percent increase.