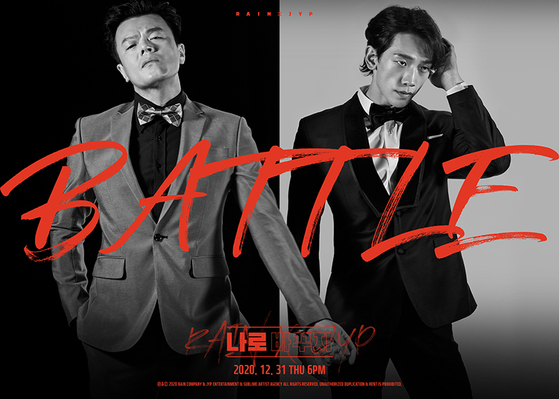 
A teaser image was released on Monday to signal a new collaboration between singer Rain, of Rain Company, and singer Park Jin-young, who is an executive producer of JYP.

The two artists, who are both known for their powerful stage performances, will release “Duet with JYP” on Dec. 31, at 6 p.m. through major music websites and mobile applications.

Rain debuted as a solo singer under the umbrella of JYP Entertainment in 2002 before he left the agency in 2007. It’s been widely reported in media interviews and on entertainment shows that the two have remained close friends.

Evoking the feel of 1990s dance music, the song was composed and written by Park and is about two men battling for one woman.

Taking a different strategy to debut the collaboration between the two big-name stars, the duo decided to release their new song through morning talk show “Morning Forum,” also known by its Korean title “Achim Madang,” instead of having their first performance through major music programs like other singers usually do.