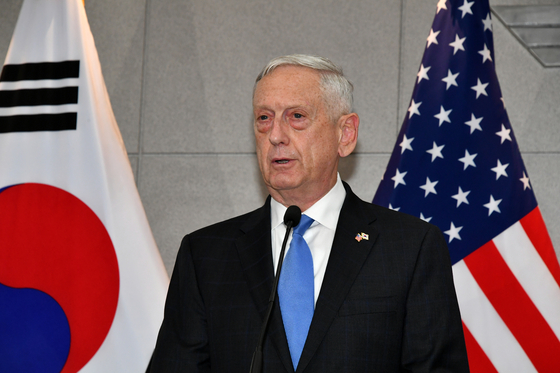 
South Korea’s Ministry of National Defense and the JoongAng Ilbo jointly announced former U.S. Secretary of Defense James Mattis the winner of a government award for his contributions to the security of the Korean Peninsula.

Mattis, who served as head of the Pentagon from January 2017 to January 2019, will be the eighth person to receive the Paik Sun-yup ROK-U.S. Alliance Award, named after the famed Korean general critical to establishing the early military ties between the allies.

A Defense Ministry statement read that Mattis was selected for the award in recognition of his stable leadership during a period of crisis on the peninsula in 2017, helping lay the foundations for the pursuit of diplomatic talks henceforth.

The former Pentagon chief also helped create a blueprint for how the alliance would operate following the transition of wartime operation control (Opcon) by signing a key document outlining guiding principles, the statement continued.

The proceeds from the award will be used to help erect a wall to commemorate U.S. veterans of the 1950-53 Korean War in Washington in Mattis’ name, as per his wish, the ministry said.

Though an award ceremony was due to be held during the South Korea-U.S. Security Consultative Meeting (SCM) in Washington last October, the Covid-19 situation prompted the ministry to postpone the event until early next year.

Since late Gen. Walton Walker, who commanded the U.S. Eighth Army in defending the Busan Perimeter during the war, was granted the inaugural award in 2013, the Paik Sun-yup award has been presented every year to figures who have advanced the alliance in significant ways.

Mattis served as the first defense secretary to outgoing U.S. President Donald Trump, and played a key role in assuaging fears in South Korea when Trump drove up tensions with North Korea over the latter’s intercontinental ballistic missile test in 2017.

Following his exit from the cabinet, the former secretary became one of Trump’s harshest critics on foreign policy, noting the president’s taunts toward North Korean leader Kim Jong-un — including the promise to rain “fire and fury” on the regime — were “childish and dangerous,” according to journalist Bob Woodward’s book on the Trump presidency.

But Seoul’s decision to bestow its Paik award on Mattis on the basis of his work on the Opcon issue may also be aimed at underscoring prior U.S. commitment to the transfer.

Under Mattis’ successor Mark Esper, Washington cast doubt on a pre-arranged schedule on the Opcon transfer, which would allow a South Korean four-star general to take command of allied forces on the peninsula in the event of conflict.

The SCM in October exposed a growing rift between the allies on the matter, with at least one U.S. official noting the transferal of Opcon per a fixed time frame would “endanger” U.S. servicepeople and citizens in Korea.

Such reluctance from Washington amplified suspicions in South Korea that the United States may have changed its mind about returning Opcon altogether, in light of growing security threats in the region stemming from a nuclear-armed North Korea and Chinese aggression.