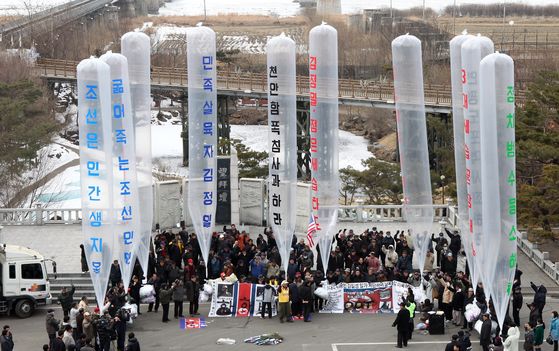 A North Korean defector group in South Korea prepares to float balloons carrying propaganda leaflets and other items into North Korea in 2016. Such acts were banned under a new law passed by the National Assembly last week. [YONHAP]


The deputy chief of Seoul’s Ministry of Unification on Sunday defended a controversial new law criminalizing the distribution of anti-Pyongyang propaganda at the inter-Korean border, justifying the ban as a lawful move to uphold South Korea’s national security at the expense of some freedom of expression.

In an English-language editorial for NK News, an outlet specializing in North Korea news, Vice Unification Minister Suh Ho said critics of the law both in Seoul and overseas “misunderstood” the intent behind the legislation, which South Korea’s National Assembly passed despite intense opposition last week.

The ban, which revises the Development of Inter-Korean Relations Act, stipulates a maximum prison sentence of up to three years, or a fine of up to 30 million won ($27,000), for spreading items like leaflets, printouts, money or electronic storage devices near the inter-Korean border with the intention of sending them to the North.

Attempts by anti-Pyongyang activists to scatter leaflets toward the North threatened a fragile peace established by inter-Korean agreements, Suh claimed, forcing the South Korean government — backed up by significant popular support — to restrain such activities for the sake of public safety.

“Today, the lives of 1.12 million people living along the border area are repeatedly threatened, daily lives and economic activities are restrained due to imposed safety measures and fear, and the local economy is suffering as less tourists visit the area,” Suh wrote.

South Korea’s ban on the leaflets is justified by the International Covenant on Civil and Political Rights (Iccpr), Suh continued, noting the United Nations treaty allowed countries to restrict freedom of expression on the grounds of respecting the rights of its citizens or to maintain national security.

“Violating the right to life of South Koreans for North Korean human rights is an irresponsible and ineffective act that endangers people,” the vice minister wrote, noting there was “no evidence” that leaflets helped improve human rights in the North.

“On the contrary, it endangers defector families in the North by strengthening the [North Korean] government‘s control and brings adverse effects to North Korean human rights,” Suh added. 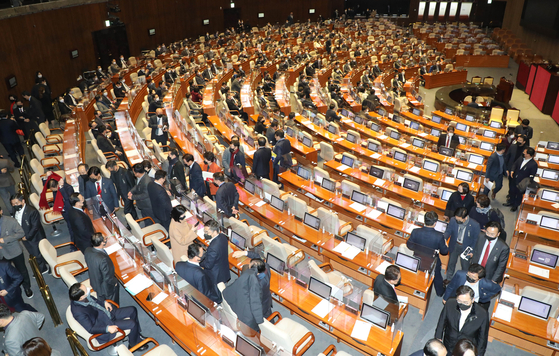 Opposition People Power Party lawmakers shuffle out of the National Assembly's plenary chamber in protest over the ruling Democratic Party's (DP) annulment of its filibuster over a controversial antileaflet bill. The DP passed the bill with its overwhelming majority on Dec. 14. [YONHAP]


Suh’s editorial was a response to a growing chorus of international criticism against the antileaflet law — galvanized by strident activism from North Korean defector organizations both in Seoul and abroad.

On Thursday, U.S. Rep. Gerald E. Connolly, a Democrat and co-chair of the Congressional Caucus on Korea, joined his Republican colleague Rep. Chris Smith in condemning the leaflet ban, noting in a press release it could have a “chilling effect” on the freedom of expression.

U.S. Ambassador to South Korea Harry Harris also reportedly raised concerns over the ban in regards to the freedom of expression during a closed-door meeting on Friday.

According to the U.S. government-funded outlet Voice of America, the Tom Lantos Human Rights Commission under the U.S. House of Representatives will hold a hearing to discuss Seoul’s antileaflet law in a new session slated for January.

The move would present a rare example of U.S. lawmakers taking steps to censure the actions of a key ally. Smith warned prior to the law’s passage in South Korea’s National Assembly last week that the hearing would discuss alleged suppression of civil liberties by the South Korean government.