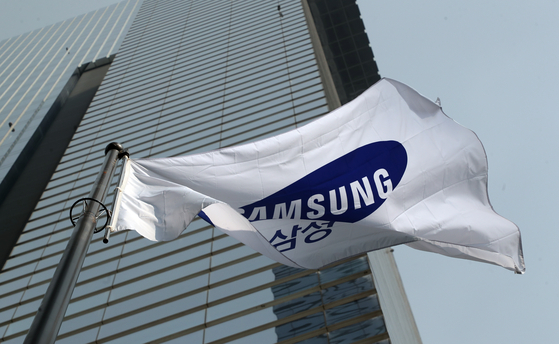 A flag at a Samsung subsidiary office in Gangnam District, southern Seoul. [YONHAP]


The inheritance tax on shares owned by Lee Kun-hee, the former chairman of Samsung Electronics, will be about 11 trillion won ($10 billion).

It is a record amount for a stock inheritance, and it is also a potential problem for the heirs, as the tax could require them to sell shares in public companies, thus reducing their overall influence over these companies.

Under Korean law, tax for inherited stock is based on the share’s closing price over a four-month period — two months before and after the day of the possessor’s death. Tuesday marked the last day of a two-month period since Lee’s death on Oct. 25.

As Lee passed away on a Sunday, the reference point of the four-month period was set to Oct. 23. The valuation of Lee’s stock was calculated by closing prices between Aug. 24 and Dec. 22.

Since his death, the value of Lee’s shares has increased significantly. Samsung Electronics and Samsung Life Insurance are trading more than 20 percent up since Oct. 23.

According to Korean law, a 60 percent inheritance tax will be charged on Lee's estate, though the tax can be reduced by 3 percent if the heirs self-report. That brings the stock inheritance tax bill to 11.03 trillion won.

Added to that is the inheritance tax imposed on the late Lee’s other assets, like real estate, art, bonds and cash, which could total another 1 trillion won. That would bring the total bill to above 12 trillion won.

Lee’s family has until late April 2021 to report tax owned and make a payment.

Domestic law allows inheritors to complete tax payments on an installment plan for up to five years. They would first pay one-sixth of the total amount in April and pay the rest, plus interest accruing at a rate of 1.8 percent, over the remaining five years.

That means they will have to come up with about 2 trillion won a year.

This complicates matters related to family influence over the Samsung Electronics and other related companies. If they are forced to sell shares to pay the tax, that would reduce the number of votes they will be able to exercise.

One possibility is an increase in the payout ratio, resulting in a higher dividend, which the family can use toward paying down the tax. Samsung Electronics has notified investors that it’s planning to roll out a new dividend policy.

“On the assumption that Samsung Electronics would increase dividends by 20 to 30 percent on year in 2021, the company’s dividends may jump by 1,700 to 1,800 won,” said Kang Song-cheol, a Shinhan Investment analyst, in a Monday report.