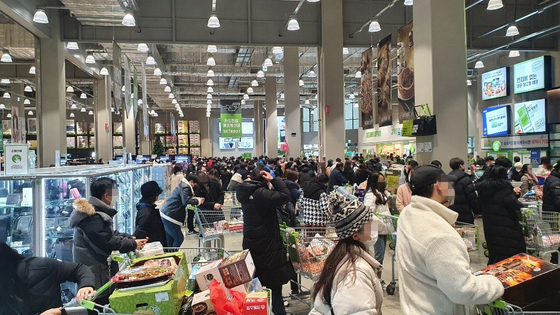 
A 36-year-old office worker went to a discount warehouse store in Yangpyeong-dong in Yeongdeungpo District, western Seoul, only to turn back when she saw the line for parking on Saturday.

She left without hesitation after seeing the crowds at the entry scrambling to get into the store.

“Since I work from home, I have been eating with my parents who help me take care of my child every day. Since this week there is also the Christmas holiday, I was going to buy enough groceries for everyone,” she said.

“I have visited this discount warehouse store for a couple of years now, and the line has never been this long.”

Having given up at the warehouse chain, she went to a neighborhood supermarket five minutes away. The store was already filled with shoppers pushing overflowing carts.

A 50-year-old Gangnam District, southern Seoul, resident parked in a building next door after failing to find a space at the garage of a warehouse discount store in Gwangmyeong, Gyeonggi.

She lost hope after seeing the line of cars circling the building twice.

“It took me one hour to park the car,” she said, carrying two bags of groceries and sweating as she hauled the load to her car 10 minutes away.

Last weekend, there were bigger crowds at the discount warehouse stores than normal ahead of the Christmas holiday and due to the coronavirus pandemic.

As more people work from home, and they avoid eating out due to the spread of the virus, groceries in bulk have become all the rage.

Emart Traders, Emart’s big-box warehouse chain, said the sale of food items, which include groceries, processed foods and snacks, rose by 35 percent Dec. 19 to Dec. 20 compared to the weekend two weeks ago.

The item with the biggest increase in sales was grains, at 35.7 percent, followed by meal replacement products, fruits, seasonings, crackers, refrigerated food and meat and fish.

The sales growth of Traders is 10 percentage points higher than Emart’s during the same period. For Emart, the biggest sales growth was for processed food, at 25 percent, followed by fruit, delicatessen meats, vegetables, meat and fish.

From Dec. 14 to 20, Homeplus reported double-digit on-year growth in the sales of daily necessities in bulks such as ingredients, side dishes, canned food, instant noodles and paper towels.

The sales growth of Homeplus Special, which combines the prices of bulk discount warehouse retailers with a conventional grocery store experience, was three times that of regular Homeplus stores.

Warehouse discount stores have been experiencing unexpected gains throughout the coronavirus pandemic as people opt to buy prepared foods and daily necessities in bulk.

This year is the 10th anniversary for Traders, which opened its first store in Yongin, Gyeonggi, in November 2010. The retailer in September opened its 19th store after opening two new stores each year on average. Introducing its private label T Standard, the brand has been strengthening its competitive edge. Traders is planning to open a store in Yeonsan-dong, Busan.

The Homeplus Special network is growing fast. Starting with the renewal of its Daegu branch in June 2018, it switched 14 of its regular stores into Homeplus Special, and the brand is now running a total of 20 Homeplus Special stores. The warehouse brand cut down on clothes, electronics and daily necessities by 800 items and added 130 fresh and processed food categories. It sought to strengthen the processed food sector, which is the most important component of warehouse stores, and expanded its assortment of fresh food.

“The spread of the coronavirus pandemic has led more people to shop at warehouse discount stores,” said a spokesperson for a local supermarket. “Since opening new stores may require physical challenges, such as selecting sites, the large supermarket chains are contemplating measures  which will allow them to utilize the existing stores.”