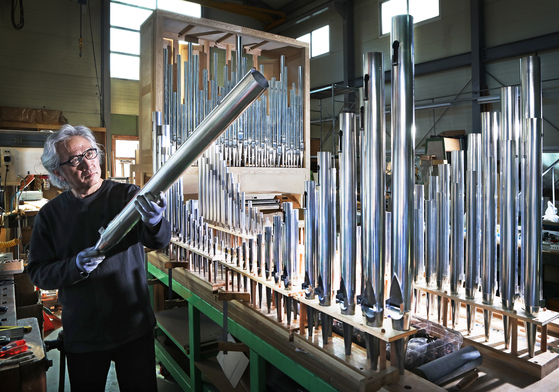 Orgelbaumeister Hong Sung-hoon looks at metal pipes as he works on completing his 20th pipe organ in his studio in Yangpyeong, Gyeonggi. The organ will be placed in the music hall in Jeonju Kijeon College in Jeonju, North Jeolla. [PARK SANG-MOON]


Orgel, pipe organ in German, was praised as the king of musical instruments by Mozart for producing beautiful sounds through its series of pipes arranged in different sizes and shapes.

The process of building an organ is similar to creating a piece of architecture, which is why it is said to be “built” instead of “made" — hence the word orgelbaumeister, which combines the German words “bau" meaning architecture and "meister" meaning master. Hong Sung-hoon is the only orgelbaumeister in Korea officially recognized by the German government.

Sixty-one-year-old Hong, who has spent the past 22 years building organs in Korea, is currently working on his 20th piece, which will be completed by the end of the month and will be installed at a music hall in Jeonju Kijeon College in Jeonju, North Jeolla, next month. 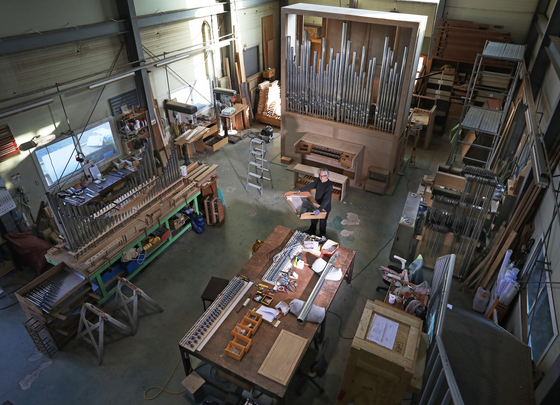 Then he pursued a career as a musical actor for about a year after joining the Seoul Song and Dance Ensemble in 1985, which is now called the Seoul Performing Arts Company, the national performing arts organization under the Ministry of Culture, Sports and Tourism.

But after failing to see a promising future as a part-time musical actor, Hong decided it was time to go abroad to study music in depth.

When he turned 27, he went to Germany to learn how to play classical guitar, but after about a year, doubt struck again and Hong questioned whether he had any future with the instrument. His friend, who was also studying abroad with him, suggested that he try something completely new — the organ. 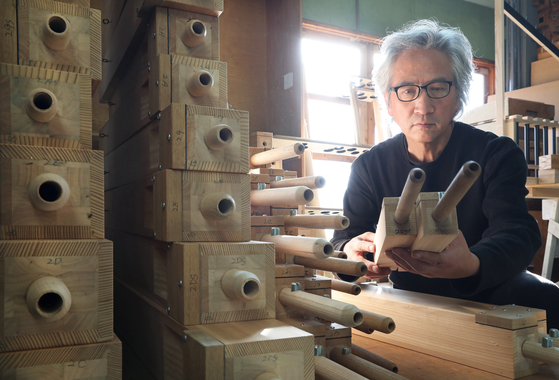 
Hong who had no prior knowledge of the instrument said he was deeply moved when he first heard the sound of an organ at a cathedral church in his village. As soon as he heard the sound he said he fell in love, picturing a scene where angels were pouring down musical notes from their buckets. After being deeply moved by the experience, he decided to become an orgelbaumeister. 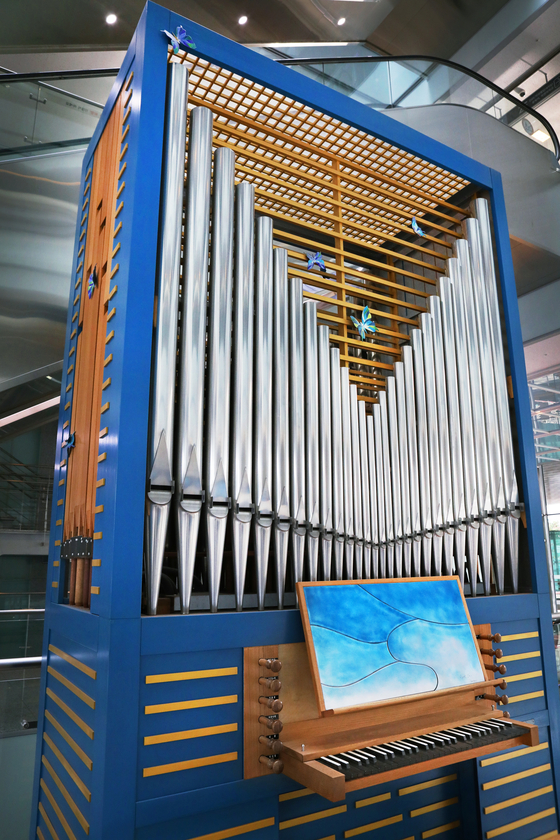 A blue organ made by Hong Sung-hoon in the lobby of DMC Tower in Sangam-dong of Mapo District, western Seoul. [PARK SANG-MOON]


But the journey to earn such a title is not an easy one. After a year of woodworking practice followed by three and a half years of apprenticeship, he passed the state-recognized orgelbau examination in 1991. Then he entered the world-famous orgelbau workshop, Johannes Klais Orgelbau — founded in 1882 and run by three generations of the Klais family.

Hong gained five years of work experience under the founder’s grandson Hans Klais. To become an orgelbaumeister, at least five years of work experience is required after completing the apprenticeship course. Under Klais, Hong was able to gain first-hand experience of constructing, repairing and restoring various organs, including the ones in Basilica St. Ludgerus, St. Stephen's Cathedral and the Athens Concert Hall.

After completing a course at the Oscar-Walcker-Schule in Ludwigsburg, one of the leading schools in the world for organ builders to take a master’s examination, he took the test to qualify as an orgelbaumeister. He failed his first exam in 1996, but went on to pass the following year, finally qualifying as an orgelbaumeister. After hearing the news that he passed the exam, he said he shed tears as he recalled his past decade of hard work to reach his goal.

As an official orgelbaumeister, he was guaranteed a stable life if he remained in Germany. But just a year after earning the title, he returned to Korea in November 1997. Because of the financial crisis that hit Korea, Hong had to wait more than two years before having the chance to build an organ. In the meantime, he installed his very first organ that he made for his graduation project at the annex church under the basement of the Cathedral Church of St. Mary the Virgin and St. Nicholas in Jung District, central Seoul. 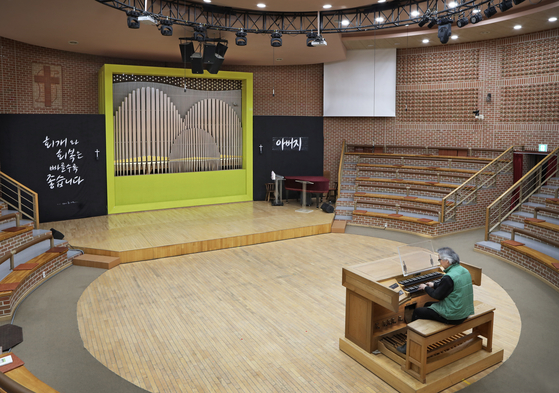 An organ made by Hong Sung-hoon with pipes shaped into a landscape scene at Guksu Church in Yangpyeong, Gyeonggi. [PARK SANG-MOON]


Hong's second organ was built at Bongcheon Cheil Church in Gwanak District, southern Seoul. Since then, he completed 20 organs in various parts of Korea including in Dongsan Church in Yongin, Gyeonggi, Im-dong Cathedral of the Sacred Heart of Jesus in Gwangju, Sunsa Church in Seongnam, Gyeonggi, DMC Tower in Sangam-dong, western Seoul, and Guksu Church in Yangpyeong, Gyeonggi. 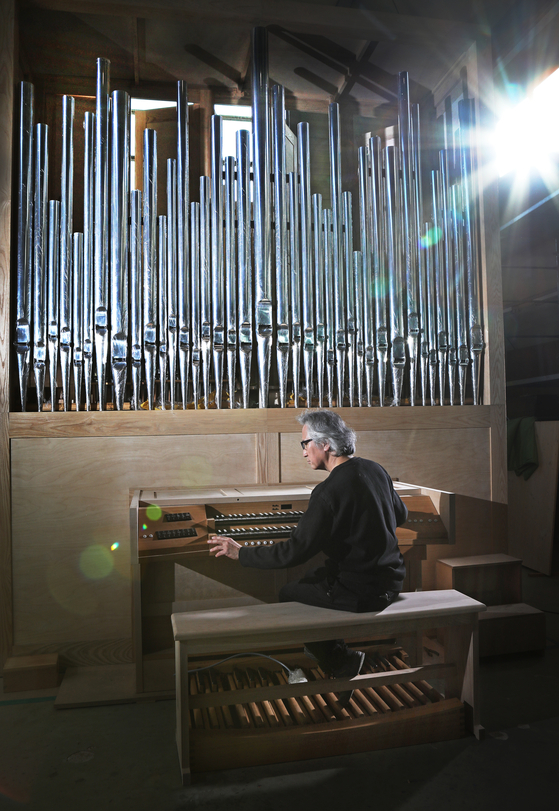 Orgelbaumeister Hong Sung-hoon tests a pipe organ that he is building. [PARK SANG-MOON]


Hong is working on three goals to produce Korean-style organs that are different from traditional European organs. The first is to build organs by using local materials. Currently, only 30 to 40 percent of organ components are made in Korea, such as the organ case, wind box and wooden pipes. The rest of the metal pipes, motors and electrical equipment are imported. Hong says he plans to use only 10 percent of imported components in the future. 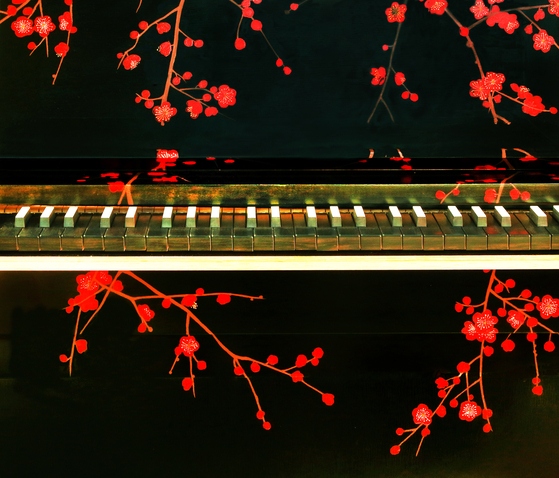 
The second is to apply Korean traditional beauty to his instruments. Hong has collaborated with chilbo (traditional Korean enameling) artist Park Soo-kyung, painter Chae Myung-hee and Yang Hyun-seung who is skilled in designing hinges. He also colors his organs in blue to portray an ocean, or light green to portray a mountain landscape.

Hong wants to recreate Western organs into a Korean organ by incorporating Korean people's lives in the instrument and making a pipe organ that is distinct from its Western counterpart. Hong hopes that it will not only enhance people's quality of life but also create a new culture unique to Korea.