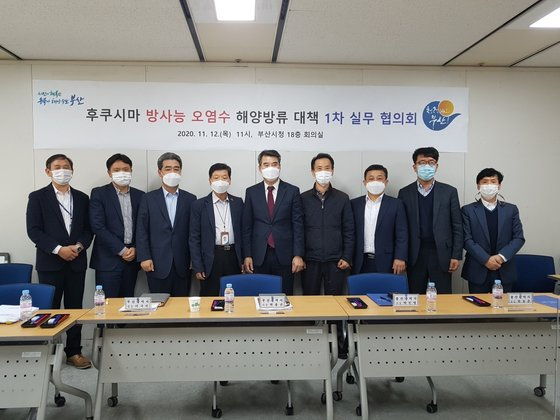 Representatives from cities and provinces like Busan, Ulsan, South Gyeongsang, South Jeolla and Jeju sharing the sea with Japan hold a working-level meeting at the Busan City Hall on Nov. 12 to address concerns about the Japanese government’s plans to discharge contaminated water from the crippled Fukushima nuclear power plant. A group of 17 mayors and governors on Tuesday adopted a joint statement urging Japan to halt such plans. [BUSAN METROPOLITAN CITY]


The mayors and governors of all 17 major cities and provinces in Korea adopted a joint statement warning against Japan releasing contaminated water into the ocean from its crippled Fukushima nuclear power plant.

In a joint statement Tuesday, the Governors Association of Korea, which includes cities that are administered as provinces, called on the Japanese government to “immediately halt discussions to release the radioactive water from Fukushima" and to "share information to the public in a transparent manner.”

The governors’ statement comes as Japan is nearing a decision on plans to release over 1.2 million tons of contaminated water from the Fukushima Daiichi nuclear plant into the Pacific Ocean.

A massive earthquake and tsunami struck Japan on March 11, 2011, causing a meltdown at the Fukushima plant, operated by Tokyo Electric Power Company (Tepco). For the past decade, Japan has struggled over what to do with radioactive water stored in huge tanks.

Plans to dump the water have been delayed in Japan amid fierce protests both domestically, including by its local fishery industry, and internationally, from environmental organizations and governments of nearby countries such as Korea and China.

The Korean governors’ statement urged Japan to be transparent about sharing information on plans to discharge water with Korea, called for safety inspections involving experts from international organizations and related countries and asked for stricter inspections of radiation levels in Japanese seafood and produce imported to Korea.

The statement, signed by North Jeolla Gov. Song Ha-jin, the chair of the Governors Association of Korea, and 16 other leaders of local governments, noted that the recommendations are in order to “safeguard the right to life and safety of the people.”

Representatives of coastal cities and provinces like Busan, Ulsan, South Gyeongsang, South Jeolla and Jeju held an initial working-level meeting on Nov. 12 to address concerns about the discharge of contaminated Fukushima water.

The governors’ joint recommendation will be passed onto relevant Korean government agencies including the Prime Minister’s Office, Ministry of Foreign Affairs and the Ministry of Maritime Affairs and Fisheries.

The governors' association vowed to “actively work with the central government” in the future to prevent the discharge of the radioactive water into the ocean.

“The discharge of the contaminated Fukushima water is an issue that requires solidarity among the local governments,” said Busan Acting Mayor Byeon Sung-wan. “We will respond firmly and strongly as this is an issue that is directly connected to the health and safety of our people.”

Seoul officials have recently voiced concern that Japan has not provided enough information to Korea about its plans to release the radioactive water. The Korean government has made requests for more transparency from Japan, in accordance with the United Nations Convention on the Law of the Sea.

An official with the Japanese Embassy in Korea told reporters in Seoul in late November that the release of the contaminated water from the Fukushima plant is a matter of Japan’s “sovereignty.”

Japanese Prime Minister Yoshihide Suga visited the Fukushima plant in late September and said that the government wants to make a decision "as soon as possible" on how to dispose of the water. He made similar remarks on Dec. 10, saying that a decision can’t be postponed forever.

Japan estimates that the tank storage for the contaminated water will reach its maximum capacity in the summer of 2022.

Kyodo News reported Sunday that the International Atomic Energy Agency (IAEA) is ready to send a monitoring team to check the water set to be discharged from the Fukushima plant.

However, an investigation by Greenpeace warned that contaminated water from the wrecked Fukushima plant contains a “long-term radiological hazard” that can damage human DNA and remain in the environment for generations to come.

The report released in October by Greenpeace Germany, “Stemming the tide 2020: The reality of the Fukushima radioactive water crisis,” stated that the water contains strontium-90, carbon-14 and other hazardous radionuclides.

The report described that the Japanese government and Tepco “have constructed a series of myths to support their plan,” including that there will be no further space for storage of the water by 2022 and that the water is not contaminated.

It goes onto state that the “Japanese government’s narrative has been created for both financial and political reasons,” noting that discharging the water into the ocean is the “cheapest option” and “helps the government create the impression that substantial progress is being made in the early decommissioning of the Fukushima Daiichi reactor.”

Tepco acknowledged in August for the first time the presence of high levels of radioactive carbon-14 in the contaminated tank water at the plant. Carbon-14 has a half-life of 5,370 years, the report noted, and if the contaminated water is discharged into the Pacific Ocean, it will be “incorporated into all living matter.” The report described that carbon-14 “will be delivered to local, regional and global populations for many generations.”

Greenpeace concluded that the “only acceptable solution is continued long-term storage and processing of the contaminated water,” to safeguard the environment and health of the people in the area and the wider international community.