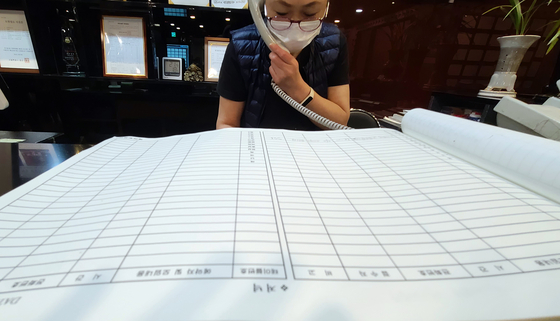 A worker at a restaurant in Jongno District, central Seoul, receives calls from customers Tuesday canceling their reservations. The reservation list is empty for the coming weeks, she said, in stark contrast to last year. [YONHAP]


A ban prohibiting people from eating in groups of more than four will go into effect for restaurants nationwide this week, while winter sports facilities will close.

Health authorities announced the latest restriction Tuesday as they said the country registered 869 new Covid-19 cases the day before, the first time in a week that daily infections fell below 900.

Despite the decline, 24 patients died Monday, the same as Sunday’s all-time high.

With health authorities fearing cases might explode during Christmas and New Year’s, the local governments of Seoul, Incheon and Gyeonggi — which comprise the greater Seoul area — each announced Monday they would cap all social gatherings within their jurisdictions at four people.

The administrative orders were said to go into effect Wednesday and tentatively expire on Jan. 3, and applied to any indoor or outdoor social gatherings meant to “build bonds,” including company lunch and dinner outings, workshops, picnics, birthdays and friendly get-togethers.

Weddings and funerals were not included.

People living in Seoul, Incheon and Gyeonggi were told to obey the order even if they temporarily leave the greater Seoul area for, say, a visit to their friends or family.

On Tuesday, the central government went a step further, saying the same new rule would be applied to people outside the greater Seoul area eating in restaurants, effective Thursday until Jan. 3. In places other than restaurants, social gatherings of more than four people were “strongly recommended” not to be held. 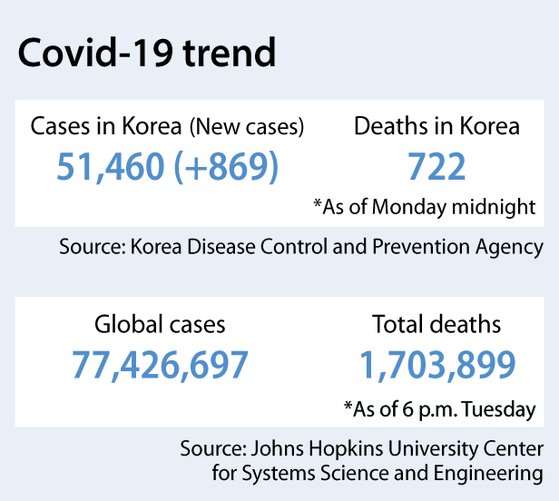 National parks, which are famous hiking destinations, as well as popular Jan. 1 sunrise spots will have to shut down, too — namely Namsan Park in Seoul; Jeongdongjin in Gangneung, Gangwon; Ganjeolgot in Ulsan; and Homigot in Pohang.

Yoon Tae-ho, a spokesperson for the Central Disaster Management Headquarters, said in a Tuesday press briefing that the central government was hoping to curb the recent spread without having to go into the harshest Level 3 social distancing measures, which would cause “colossal social and economic damage.”

In case the heightened restrictions don’t do the trick, Acting Seoul Mayor Seo Jung-hyup said in a radio show Tuesday morning that Level 3 restrictions could be imposed in the Korean capital. 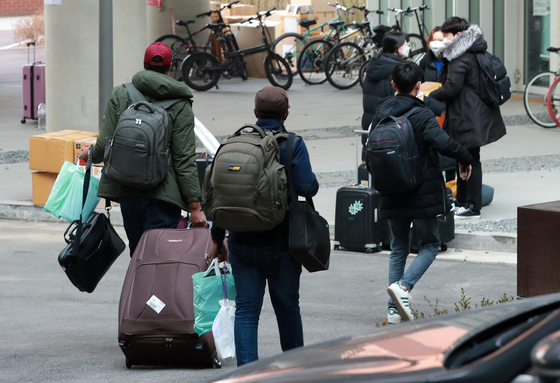 Students at the University of Seoul in Dongdaemun District, central Seoul, move out of their dormitory Tuesday to transfer to a hotel after the Seoul Metropolitan Government announced that some buildings on the school campus would be converted into so-called life treatment centers for Covid-19 patients with mild or no symptoms. [NEWS1]


The new restrictions came as the nation registered 869 coronavirus cases Monday, 824 of which were domestic infections — 309 in Seoul, 193 in Gyeonggi, 58 in North Gyeongsang, 44 in Incheon, 39 in Daegu, 30 in North Chungcheong, 26 each in Busan and Gwangju, 23 in Gangwon, 19 on Jeju Island, 18 in South Gyeongsang, 15 in South Chungcheong, nine in Daejeon, six in Ulsan, four each in North Jeolla and South Jeolla as well as one in Sejong City.

All 17 major cities and provinces saw at least one new case, according to data from the Korea Disease Control and Prevention Agency (KDCA).

The remaining 45 cases were imported — 16 from the United States, nine from Russia, five from Indonesia, two from Mexico and one each from Nepal, the Philippines, Kyrgyzstan, India, Myanmar, the United Arab Emirates, Ukraine, Sweden, Austria, Yugoslavia, Brazil, Kenya and Cameroon.

Twenty-four patients died Monday, raising total deaths to 722, while 773 people recovered, bringing entire recoveries to 35,928. As of Monday at midnight, Korea had counted 51,460 coronavirus patients in all.

At the Seoul Detention Center in Uiwang, Gyeonggi, at least two inmates were diagnosed with Covid-19, prompting every worker and prisoner inside the facility to be tested. That included former President Park Geun-hye, though her test results were not immediately known.

Park has been detained at the Seoul Detention Center since March 2017 throughout her trial for abuse of power and corruption.

At least 216 cases have been traced to the Seoul Dongbu Detention Center in Songpa District, southern Seoul, recently, where Park’s predecessor Lee Myung-bak is serving a 17-year sentence for corruption. His results turned out negative over the weekend.

In Eumseong County, North Chungcheong, a cluster that recently emerged from a hospital grew by 37 cases to reach a total of 84 infections.