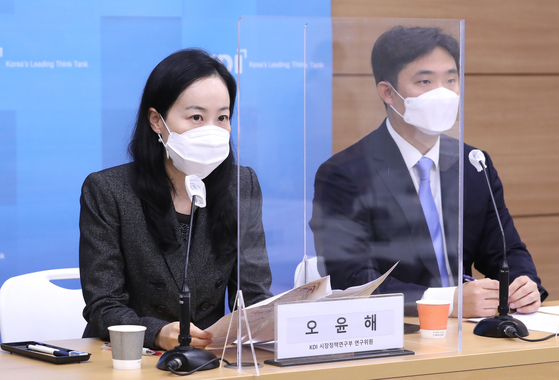 Oh Yoon-hae, a researcher at Korea Development Institute (KDI)’s markets and institutions department, left, and Kim Mee-roo, a researcher at KDI’s knowledge economy department, talk about the effectiveness and implications of the first emergency relief grants that were distributed to the public in May at the government complex in Sejong City on Wednesday. [YONHAP]


Only about 30 percent of the government's first emergency relief grants were used for consumer spending, the Korea Development Institute (KDI) reports.

According to the state-run economic think tank on Wednesday, the total amount of the first emergency relief grants distributed to the public, including additional aid from local governments, was 14.2 trillion won ($12.8 billion) to 19.9 trillion won. Excluding gift certificates and coupons, the amount totaled between 11.1 trillion won and 15.3 trillion won. Of that, only 26.2 percent to 36.1 percent, or about 4 trillion won, was actually spent by the public.

The remaining 70 percent was utilized for debt payments, savings or other sorts of spending, KDI estimated.

The distribution of emergency relief grants was particularly effective in motivating consumption of durable goods such as automobiles, semi-durable goods and basic daily necessities, but not that much went toward food industries or the service sectors.

KDI also pointed out that the government’s distribution of emergency relief grants was still helpful in boosting the overall consumption.

Credit and debit card spending during May 11 to June 21 soared 7.3 percent compared to the same period a year earlier. The increase rate declined after that period and was about 6.1 percent in July and August.

Private consumption rose 1.5 percent in the second quarter of the year compared to the previous quarter.

The think tank said the government’s direct handouts to people who are working in hard-hit industries, such as travel or services, is essential as distribution of emergency relief grants could not be a great help to those companies who have met a sharp decline in sales due to the pandemic.

“Considering the possible situation of distributing another round of emergency relief grants, [the government] must collect and analyze the size of damages by industries and build a system that can support the hard-hit sectors more rapidly and thoroughly."