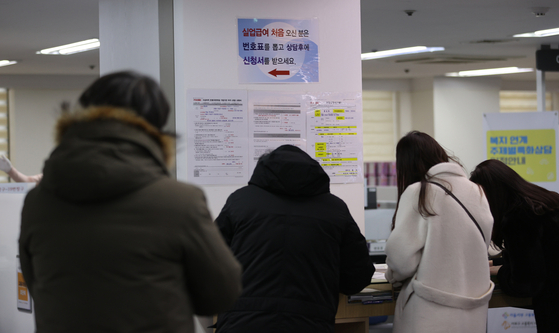 People lined up to apply for unemployment benefits, which are granted to only those that subscribed to employment insurane, at a job center in Seoul on Dec. 16. The government laid out a roadmap towards an employment insurance for all on Dec. 23. [YONHAP]


First it was the artists. Soon it will be the freelancers and the salesmen. And finally the self-employed.

The weary workers in these lonely trades are getting employment insurance.

The government on Wednesday laid out its road map to gradually expand coverage to anyone making an income, even if it is low, sporadic and unpredictable.

Artists, who have been eligible since Dec. 10, will have to prove their earnings with written contracts. It is estimated that 75,000 can come up with paperwork to qualify.

Freelancers, which includes private tutors and golf caddies, will be eligible to subscribe to the employment insurance starting July 2021. They will have to be in one of the 14 categories that already pay into the workers’ compensation insurance program. Insurance salespeople, private tutors, truck drivers and parcel delivery workers are included in this group.

The Korea Labor Institute estimates 1.06 million to 1.33 million workers fall into this category.

The employment insurance will be expanded to so-called platform or gig workers — people who work for online platforms of many kinds — in 2022.

It will take time to expand enrolment. This is largely because in order to subscribe to employment insurance, the government first has to get income data of each worker.

The government is aiming to connect the National Tax Service and the Korea Workers’ Compensation and Welfare Services computers by 2022 so they can exchange information in real time.

It will take time to add the self-employed to the roster of the insured as they have been reluctant to join.

Last year, only 13.7 million workers among the 27.2 million people with jobs in Korea subscribed to employment insurance. The government wants to get that to 17 million by 2022 and then to 21 million by 2025.

“By 2025 we will have added 7.33 million additional subscribers,” said Finance Minister Hong Nam-ki on Tuesday.

Until now, the insurance was only available to people working 60 hours or more a month.

The government has decided to expand employment insurance as those that don’t have a regular nine-to-five job were most vulnerable to the impact of the pandemic.

In May during his third anniversary speech, President Moon Jae-in announced that before his tenure ends he will push forward with employment insurance for all.