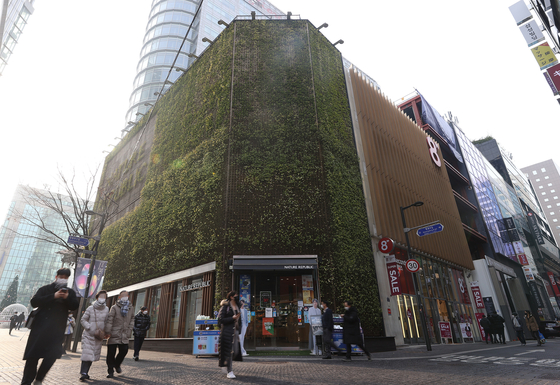 Nature Republic's store in Myeong-dong, central Seoul, on Dec. 23. The land on the cosmetics store remained as the most expensive land in the country for 18th consecutive years. [YONHAP]


The assessed value of land will rise 10.37 percent next year, according to preliminary estimates.

It will be the largest jump in 14 years.

As the assessed value is used in calculating a wide variety of taxes, including property taxes, inheritance taxes and national health insurance premiums, meaning that the change in the number has broad implications for property owners.

The land assessed value rose 12.4 percent in 2007 under the Roh Moo-hyun administration, where President Moon Jae-in served as the Blue House chief of staff.

This year’s assessed value was up 9.4 percent compared to the previous year.

On Wednesday, the Ministry of Land, Infrastructure and Transport announced the assessed value of 520,000 pieces of land. The 520,000 plots are used as the standard for assessing the value of nearly 34 million plots in the country.

The government will give 20 days until Jan. 12 for landowners to review the assessed value and request a reassessment.

The final assessed value, which will be used to tax landowners, will be announced on Feb. 1.

Sejong land prices rose after the ruling Democratic Party earlier this year started to push for relocating the nation’s capital from Seoul.

Seoul trailed behind Sejong, with an 11.41 percent rise.

While the rising land price is one of the contributing factors in driving up the assessed values, more importantly is the push to get assessed values to more closely match the market price.

The government last month announced increasing assessed value of land to 90 percent of the market value over the course of 15 years.

The latest assessed value is equivalent to 68.4 percent of the market price. Next year, the government plans to raise this ratio to 68.6 percent.

The most expensive land in the country 2021 is the parcel on which the cosmetics store Nature Republic stands in Myeong-dong, central Seoul. There, a square-meter is valued at 206.5 million won ($186,500), which is up 3.77 percent.

The same piece of land has taken the title of the most expensive property for 18 consecutive years.