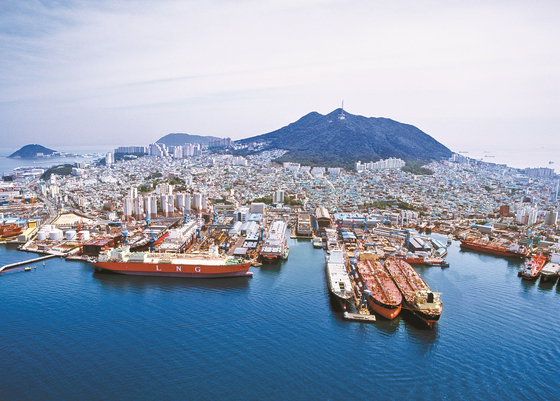 A consortium led by Dongbu was selected as the preferred bidder for Hanjin Heavy Industries & Construction Tuesday, according to Korea Development Bank (KDB).

Donbgu said Wednesday in a statement that it hopes to bolster its business by joining forces with Hanjin Heavy and that it intends to guarantee job security of workers once the acquisition is complete.

A total of 83.45 percent of Hanjin Heavy is up for sale, with KDB marketing 63 percent on behalf of itself and seven other Korean financial institutions. KDB owns 16 percent.

KDB said bidding applications were assessed independently by a third party to keep the process fair.

The SM Line consortium was selected as the reserved bidder.

While a detailed timeline regarding when the actual stock sales agreement will be signed has not been disclosed, Dongbu said it intends to include job security in the stock sales contract and quickly stabilize the company by using its know-how built up through its own receivership experience.

The company filed for receivership at the end of 2014.

“We are not considering layoffs or selling off Hanjin Heavy’s Yeongdo Shipyard in Busan,” Dongbu said in statement, adding Hanjin Heavy has resources to grow.

While Hanjin Heavy has specialized in building warships, Dongbu said it will support growth of other shipbuilding activities, including the making of special-purpose ships and small and mid-sized commercial ships.

In the construction sector, Dongbu plans to share sales networks with Hanjin Heavy as Hanjin Heavy’s apartment brand has a high recognition in Busan and South Gyeongsang while Dongbu built brand recognition in the greater Seoul area.

Hanjin Heavy failed due to losses at its shipyard in Subic Bay, Philippines. Creditors including KDB and Woori Bank took over the company last year as they converted 687.4 billion won ($620 million) in loans to shares.