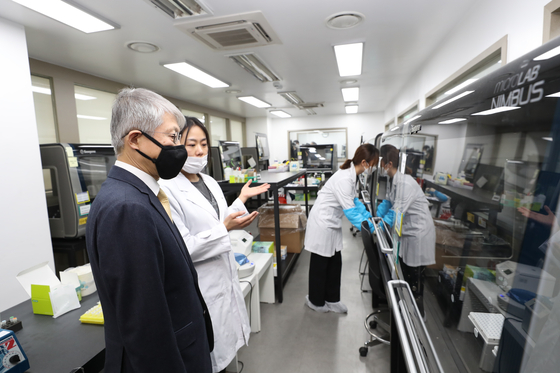 Minister of Science and ICT Choi Ki-young listens to a researcher at Seegene, a local biotech company that makes coronavirus test kits, in Songpa District, southern Seoul, in February. [NEWS 1]

The Ministry of Science and ICT is holding the 2020 Korea Science & Technology Fair online from Dec. 21 to Dec. 27, recognizing the country's achievements in bio, climate and the environment, applied technology and mobility.

A total of 221 different types of coronavirus testing kits manufactured in Korea were exported to 170 countries, amounting to around 2.5 trillion won ($2.3 billion) in exports, according to the Korea Customs Service. Exports last month alone hit 594.3 billion won, breaking previous records.

The domestic testing kits were approved one month into the pandemic after consistent research and development (R&D) in the area.

In the climate and environment sector, the launch of the Chollian-2B satellite in February is considered a milestone this year.

The Chollian-2B is a satellite that can track fine dust and other air pollutants. The world’s first geostationary environment-monitoring satellite, Chollian is equipped with the Geostationary Environmental Monitoring Spectrometer (GEMS), an ultra-precision optical observation system for monitoring air pollutants and Geostationary Ocean Color Imager II, or GOCI-II, which can monitor in real time the migration of red and green tides and maritime disasters such as oil spills in oceans around the Korean Peninsula.

The ultra-precision optical observation system allows up to eight observations per day. The cutting-edge technology is expected to contribute to progress in tackling fine dust with international cooperation after compiling relevant data. 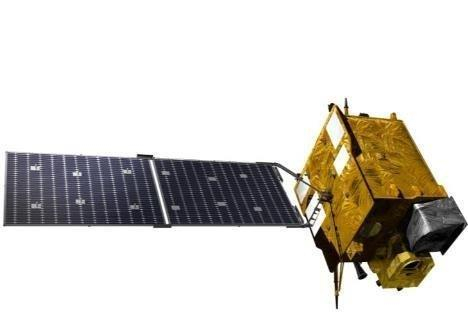 
In May, Nature Index, a database under global science journal Nature, published an edition dedicated to Korea’s innovation in science. Citing the “concerted government push to make Korea an innovation leader, backed by strong investment and systematic reform,” Nature said Korea’s efforts in R&D led to “rapid and long-lasting results.”

Korea’s R&D funds grew from 2.1 percent of GDP in 2000 to more than 4.5 percent in 2018. Kim V. Narry, the director of the Center for RNA Research at the Institute for Basic Science, in April unveiled the genome map for Covid-19 based on R&D resources from Korea.

The government is planning to expand the budget to support voluntary research, which is conducted after researchers proactively determine the research topic, fund and length of research.

The R&D budget for next year is 2.35 trillion won, 350 billion won higher than this year, based on the need for consistent government support. Starting next year, the government will support emerging scientists through the National Research Foundation of Korea.

From left, air sterilizer and portable Wi-Fi product for emergency use, designated by the Science Ministry as innovative products for public procurement this year. [MINISTRY OF SCIENCE AND ICT]


Following models in the European Union and the United States, Korea has been implementing a public procurement system to help innovative lesser-known small- and medium-sized enterprises (SMEs) in the market. The government and state-owned enterprises purchase the goods and services of SMEs to strengthen their competitiveness.

The Science Ministry in August selected nine innovative products out of 53 applicants from SMEs that will be subject to the public procurement process, including an air sterilization filter for enclosed spaces and portable Wi-Fi products for emergency use in mountains and disaster areas.

On the big screen