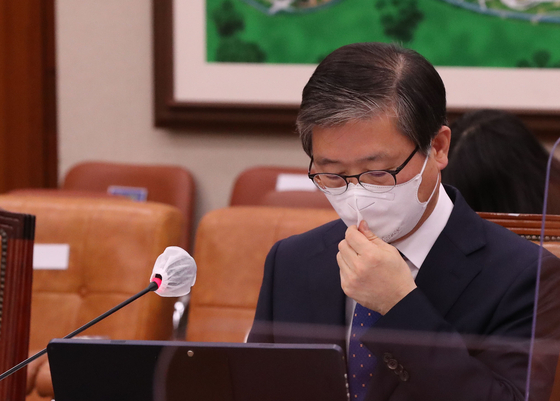 Byeon Chang-heum, Korea's land minister nominee, at his confirmation hearing at the National Assembly's committee on land and transportation on Wednesday. [OH JONG-TAEK]


Over and over again, Byeon Chang-heum, Korea’s land minister nominee, was told to apologize for his previous remarks, widely criticized as insensitive, during his confirmation hearing at the National Assembly on Wednesday.

“On the day of the fatal accident at Guui Station that took away the life of subway maintenance worker Kim, he was forced to work alone on repair work that requires the work of two people at least,” opposition People Power Party (PPP) Rep. Kim Eun-hye said during the hearing. “Do you know why Kim was forced to work alone, against the company regulations? Because he’d be fired otherwise. He had no other choice. Your apology, offered halfheartedly, still shows that you have no idea what it’s like for some of these young laborers whose lives are at risk every day.”

Since President Moon Jae-in nominated Byeon earlier this month as head of the Ministry of Land, Infrastructure and Transport, Byeon has been embroiled in several scandals, some of which concern his remarks on the death of the subway maintenance worker at Guui Station in 2016. At the time, Byeon was CEO of Seoul Housing and Communities (SH), a city-run housing company. The incident shed light on some of the dire working conditions of subcontracted workers in Korea.

According to the minutes of a meeting held in 2016 at SH, Byeon condemned the young maintenance worker.

“If you look at this closely, it is an accidental death of an employee of a subcontracted maintenance company for Seoul Metro who got killed because of his own mistake,” Byeon was quoted as saying in the meeting. “It’s actually nothing. If the victim had paid just a little more attention, it would have not happened.”

Lawmakers at the hearing repeatedly asked Byeon for an apology. Justice Party Rep. Sim Sang-jung even played a recording of an interview with Kim’s mother.

“There is not a day that goes by that I wish that I can hold my dear boy’s face in my hands,” Kim’s mother’s voice rang out in the room. “There is only one thing I live for now — to make sure people know that it wasn’t my son’s fault.”

When asked to offer his response, Byeon looked down on his desk for a few seconds before saying, “I am truly sorry for what I said, it was imprudent. I apologize to everyone who was hurt by what I said.”

Some opposition lawmakers insisted that the Blue House rescind its nomination — that, or Byeon decline it.

The confirmation hearing is non-binding, and the opposition has no power to stop the appointment. Once the hearing concludes, the committee drafts a report on the nominee which is pronounced at the Assembly’s session and submitted to the president. The president has the power to appoint the nominee with or without the report.

“A man causing such controversies must not be appointed a minister of a nation,” said PPP Rep. Kim Hee-kuk during the hearing. “It is a disgrace to the people of Korea. Byeon had better resign, and if he cannot find the courage to do so, the one who nominated him ought to withdraw that nomination.”

Members of the ruling Democratic Party (DP) focused their questions on Byeon’s policies.

In response to a question from a DP lawmaker, Byeon pledged to prioritize the safety of laborers.

“If I am confirmed as land minister, one of my first tasks will be to visit the construction sites and other working environments of laborers today, to find out the dangers and risks they face in their work every day and to work on measures that would promptly address these risks.”

The bill was drafted by Justice Party Rep. Kang Eun-mi and several other lawmakers in June, and provides legal grounds for a company CEO to be fined up to 1 billion won ($901,440) or receive more than three years in prison if found at fault.

“I believe the law, if passed, will send a strong signal to companies to take responsibility for the employees’ safety, from the beginning to the end of each project,” Byeon said. “These accidents take place mainly because of loopholes in existing safety measures, which will have to be strengthened.”

Kim, a lifelong politician, was accused of being out of touch with reality because she had little hands-on experience working on housing policies.

Byeon during the hearing stressed his experience working closely with the Seoul city government for years on several redevelopment projects and promised to find ways to provide affordable housing for more people.

In an online press conference Byeon hosted on Dec. 18, he detailed some of his policy ideas, which include utilization of more spaces near subway stations to create new residences. The proposal would give young adults without cars priority to live in those homes.

The National Assembly on Tuesday also held confirmation hearings for nominees Kwon Deok-cheol, former vice minister of health and welfare, to lead the ministry and Jeon Hae-cheol as interior and safety minister. The committee on health and welfare drafted a report on Kwon, but the committee on public administration and security requested more time for internal discussions.