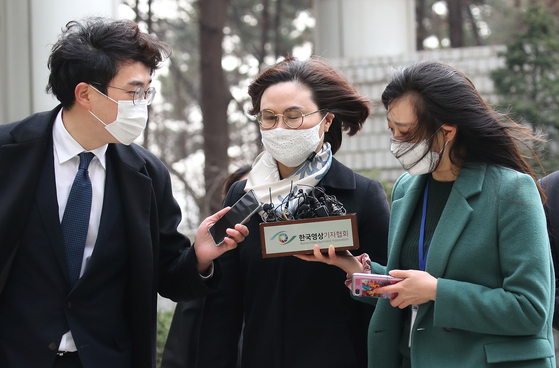 
Chung Kyung-sim, wife of scandal-plagued former Justice Minister Cho Kuk, was convicted Wednesday of a series of academic frauds to help their daughter get into college and graduate schools and sentenced to four years in prison.

After announcing the ruling and punishment, Judge Im Jeong-yeop of the Seoul Central District Court ordered the immediate detention of Chung, a 58-year-old English-language professor at Dongyang University. She was sent to the Nambu Detention Center directly from the courtroom.

In addition to the four-year jail term, the court ordered Chung to pay a 500-million-won ($452,000) fine and a separate 138 million won in unlawful gains.

Chung’s lawyer said she will appeal the conviction.

“Starting from the confirmation hearing of former Justice Minister Cho till the end of her final argument in this trial, she never admitted her wrongdoings and showed no remorse,” Judge Im said. He criticized Chung for having abused her and her husband's position in society to commit crimes.

Chung's husband Cho, a core member of President Moon Jae-in’s inner circle, served only 35 days as justice minister before resigning from the post in October 2019 after scandalous revelations came about his family. He was investigated and indicted on criminal charges associated with the children’s academic frauds and receiving bribes. The case is being tried at the Seoul Central District Court by Judge Kim Mi-ri. 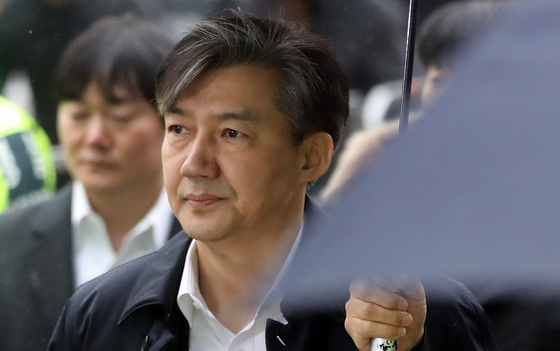 
Chung was indicted last year on three main allegations. She was accused of having forged documents to help her daughter get accepted into Korea University and two medical schools; making illegal investments using a private equity fund; and destroying evidence.

She was indicted on 15 counts and the trial lasted 16 months. On Wednesday, she was convicted of 11 of the 15 charges.

“She has never admitted to her wrongdoings, not even once,” Judge Im said. “She argued that witnesses who testified about admissions fraud made false claims for political purposes, triggering public criticism of them. She, therefore, caused mental pain to people who have spoken the truth.”

Im specifically cited Chung's fabrication of a Dongyang University presidential award for her daughter Cho Min — without the knowledge of the president of the university — and forged his seal on the award.

The court also said Cho Min’s internships at prestigious institutions such as the Center for Public Interests and Human Rights Law of Seoul National University, the Biotechnology Research Institute of Kongju National University, Dankook University’s Medical Science Research Institute and KIST were all fabricated, and Chung had forged false certificates attesting to them for her daughter.

“Chung’s crimes not only obstructed the universities’ fair admission process, but also caused applicants to have disappointment and distrust in the system,” Im said.

Im also found Chung guilty of some charges associated with her investments, but not all.

Chung was convicted of using inside information to make an investment and profit from it. The court also found her guilty of using a bank account of her hairstylist to conceal wealth.

“Although she must make an honest and faithful report about the family assets under the Public Service Ethics Act, she used another person’s account and used insider trading to increase and conceal the wealth,” Im said. “It is a serious crime that disturbs the order of the market.”

According to the law governing public servants' ethics, Chung, as wife of Cho — who served as a senior presidential secretary for civil affairs as well as justice minister for the Moon administration — was required to disclose her wealth to the government.

Im, however, cleared charges that she signed a fake consulting contact with a private equity company and embezzled money. She was also acquitted of a charge that she had filed false information to the financial authorities about her investments.

While admitting that Chung destroyed evidence, the court did not convict her of ordering evidence destruction.

The prosecution indicted her for having ordered her asset manager to destroy computers at home and her school office, but the court said she could not be convicted of the charge since she was a co-conspirator who jointly destroyed the evidence, rather than merely making an order.

Im said he decided to take Chung into custody immediately after the sentencing because she had destroyed or concealed evidence during the investigation. “Although there is a low risk of flight, there is a high possibility that she will force witnesses to make false testimony in her appeal,” Judge Im said.

Since a detention warrant expired in May, Chung underwent the trial without being detained.

“It is extremely shocking,” husband Cho wrote Wednesday in a Facebook post. “I guess this ordeal was unavoidable ever since the moment I was nominated as a minister. We will immediately appeal the ruling.”