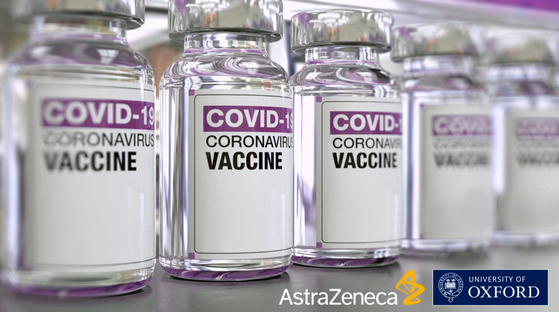 The first shipment of AstraZeneca’s Covid-19 vaccine is expected in Korea in February or March. [ASTRAZENECA]


Some 1.5 million doses of AstraZeneca's Covid-19 vaccine are expected to arrive in Korea between February and March next year, according to a government source.

A government source told the JoongAng Ilbo Tuesday that of the vaccine for 10 million people procured from the British-Swedish biopharmaceutical company AstraZeneca, or 20 million doses, “doses enough to vaccinate 750,000 people are committed to arrive first in February or March.” The AstraZeneca vaccine requires two doses.

The Korean government on Dec. 8 said that the AstraZeneca vaccine was set to arrive in the first quarter of next year but has not confirmed the exact amount expected in the first round.

While the government said it has procured Covid-19 vaccines to cover 34 million people, AstraZeneca is the only pharmaceutical company it has inked a deal with so far.

The Korean government is looking to sign deals with Pfizer and Johnson & Johnson's Janssen within the year and Moderna by next month. It plans to procure enough vaccines to cover 10 million people each from Pfizer and Moderna, with both companies’ vaccines requiring two doses. Another four million would be supplied by Janssen, which requires a single dose.

The Oxford-AstraZeneca vaccine is cheaper and easier to mass produce than other leading contenders and is easier to store. But it has had a somewhat confusing publication of late-stage clinical trial results that show an efficacy of 70 to 90 percent.

The Pfizer-BioNTech vaccine had an efficacy in adults over 65 years of age of 95 percent, while final trial results from the Moderna vaccine showed 94-percent efficacy. However, both vaccines are pricier and have to be stored at much lower temperatures.

But the price of AstraZeneca’s shot, at around $3 to $5, is a fraction of the cost of the other leading vaccines, and it can be stored and transported in normal refrigerated conditions at temperatures between 2 to 8 degrees Celsius (36 to 46 degrees Fahrenheit) for up to six months.

The government is working to receive a shipment of the Pfizer vaccine in the first half of next year, though the actual possibility looks slim at the moment.

The government official said Korea has "requested tens of thousands of the company’s vaccines first, but Pfizer’s representatives said that it will be only be able to supply it in the third quarter.”

The AstraZeneca doses covering 750,000 people, or around 7.5 percent of the total expected purchases, are expected to cover in the first round of inoculations quarantine officials, medical workers and other essential personnel, said a Health Ministry official.

But one expert who took part in vaccine procurement said, “If Korea, like other key developed countries, hurried to sign contracts with Pfizer and Moderna, we would have been able to bring in at least a portion of the supply earlier. At that time, Pfizer and the others were more active, but our authorities were too laid-back, thinking they could get a better deal.”

Son Young-rae, a Health Ministry spokesman, said Wednesday, “As the government announced, AstraZeneca will send vaccines in February and March, but we cannot confirm the amount because of the secrecy clause in the contract.”

The Korean government has faced criticism for lagging behind in vaccine procurement compared to other nations as countries that have secured supplies for their people early on have even begun the first stages of the vaccination process.

Son in turn stressed that verifying the “safety” of vaccines for the people is most important, saying that “there is no need for Korea to be the first country to administer vaccines.”

The Blue House Tuesday also requested that the main opposition party and other critics refrain from “politicizing” vaccine procurement policy.

However, according to the latest Realmeter poll, more than half of Koreans surveyed valued the speed of administering Covid-19 vaccines over verification of its safety.

The poll released Wednesday surveying 500 adults over the age of 19 across the country showed that 54.9 percent of respondents said that the speed of vaccinating the public was the most urgent, while 41.1 percent said that verifying the safety of the vaccine was the priority.

The U.S. Forces Korea (USFK) will start administering the Moderna Covid-19 vaccine to American troops this week. The U.S. military hospital in Camp Humphreys in Pyeongtaek, Gyeonggi, was selected by the Pentagon as one of four sites outside the U.S. mainland that will receive the initial vaccination.

Gen. Robert Abrams, commander of the USFK, in a written note to troops Wednesday said that the USFK will receive and administer the Moderna Covid-19 vaccine “to further protect the force and our community.”

The Moderna vaccine was expected to arrive in Korea as early as Thursday, according to military sources.