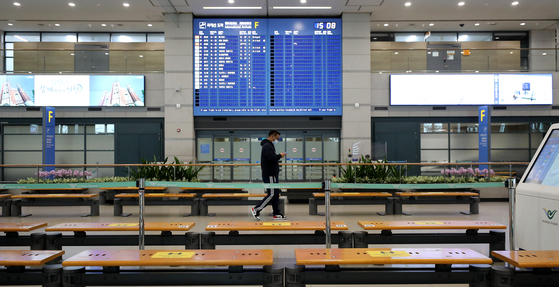 Incheon International Airport is empty Wednesday amid a global spike in Covid-19 cases and the Korean government’s ban on all flights from Britain through the end of the year responding to concerns over a new coronavirus variant detected in the country. [NEWS1]


Flights to Korea from Britain are suspended until the end of the year amid fears of a more infectious coronavirus variant in that country.

The Korean government said that the temporary flight ban from Wednesday through Dec. 31 is an attempt to block any domestic transmission of the new Covid-19 strain spreading in Britain.

Yoon Tae-ho, head of disease control for the Central Disaster Management Headquarters, said in a briefing Wednesday that related Korean agencies held a meeting on a response to the new variant Tuesday afternoon before reaching the decision.

Korea will also suspend fast-track entry for people coming from Britain, requiring everyone entering from that country to quarantine for 14 days. The Korean diplomatic missions in Britain will halt the issuance of waiver documents that allow businesspeople and other essential travelers to have the two-week mandatory quarantine period waivered with proper health screening.

Health authorities will also require travelers from Britain to take an additional PCR test upon release from the two-week quarantine period.

Korea will strengthen the criteria for temperature checks at airports, dropping the criterion for entry to 37.3 degrees Celsius (99.1 degrees Fahrenheit) from the current 37.5 degrees Celsius for travelers flying in from Britain. Flight attendants will also undergo health screenings.

Covid-19 patients who have recently been to Britain will be tested to see if they were infected with the new strain.

Korea joins some 50 countries who have announced similar flight bans on Britain in recent days.

British authorities reported to the World Health Organization (WHO) on Dec. 14 a newly discovered coronavirus strain. This variant was first detected in September and initially identified in southeast England, according to the WHO. It is linked to a surge in new cases in Britain, and British health authorities said that as of Saturday, the variant was responsible for 60 percent of new infections in London.

British health officials said that there was no evidence the new variant was more deadly than existing strains, but a study showed that it could be up to 70 percent more transmissible.

Yoon said in the briefing that the new virus variant has “yet to be discovered in any of the PCR tests administered on travelers from Britain.”

Addressing concerns about passengers flying into Korea from Britain via other European countries, Yoon noted that the European Union has strict protocols for travelers as well. He added that health authorities have been able to manage imported cases without a hitch through the mandatory two-week quarantine for all travelers flying into Korea.

In the past two months, there have been 15 imported Covid-19 cases from Britain, of which 11 patients were Koreans and four were foreigners.

Flagship carrier Korean Air, which has been operating three round-trip flights to London a week on Mondays, Wednesdays and Fridays, said that it will be suspending all flights coming in from Britain through the end of the year but will operate flights out of Incheon International Airport to London's Heathrow Airport. Asiana Airlines, which has been operating one flight a week to and from London, said it will be suspending all flights to and from Britain.

The new variant has already been detected in Denmark, Belgium, the Netherlands and Australia, according to the WHO.

Experts say that there is no reason to believe that the first Covid-19 vaccines will not work against the new strain.

The coronavirus has mutated before, and pharmaceutical companies such as Pfizer and Moderna claim that their vaccines have worked on other variations of the virus.