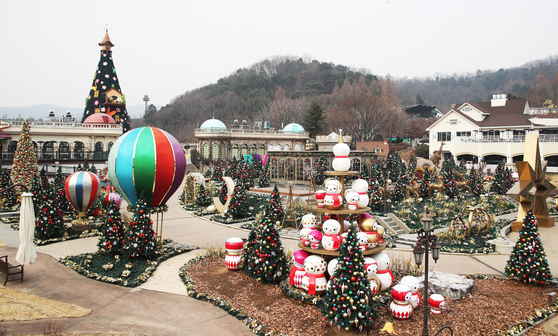 No visitors can be seen in Everland, an amusement park in Yongin, Gyeonggi, on Wednesday as social gatherings of five people or more were banned in Seoul, Incheon and Gyeonggi to prevent the spread of Covid-19. [YONHAP]


Daily coronavirus cases jumped back to 1,092 Tuesday as restaurant owners nationwide braced for heightened social distancing measures capping the number of customers allowed to eat in a group.

The latest daily count was up from 926 new cases Sunday and 869 Monday, and about the same as last Saturday’s all-time high of 1,097, according to the Korea Disease Control and Prevention Agency (KDCA).

Most new cases were detected in the greater Seoul area encompassing Seoul, Incheon and Gyeonggi.

A new restriction prohibiting people from engaging in any social gatherings of five people or more went into effect Wednesday in the greater Seoul area as health authorities try to tackle possible virus spread over Christmas and New Year’s.

The same rule applies to people outside the greater Seoul area eating in restaurants from Thursday. In places other than restaurants, social gatherings of more than four people are “strongly recommended” not to be held.

The restrictions tentatively last through Jan. 3. 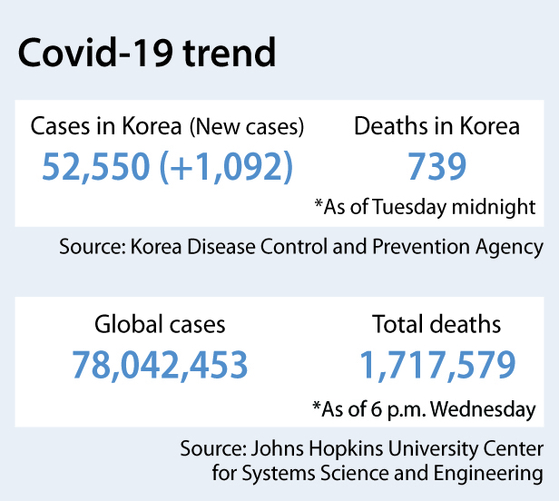 National parks and popular Jan. 1 sunrise spots have also been told to shut down from Thursday, while hotels, resorts and guesthouses were ordered to keep half their rooms vacant.

The coastal city of Gangneung in Gangwon, a famous destination for vacationers, went a step further Wednesday and announced that restaurants in the city won’t be allowed to accept any customers for 24 hours from 3 p.m. on New Year’s Eve, and can offer take-out or delivery services only.

From Thursday to Jan. 3, Gangneung said it would block access to eight of its most popular sites to watch the Jan. 1 sunrise, including the beaches of Jumunjin, Jeongdongjin, Gyeongpo and Sacheon. Saunas and public bathhouses will also entirely close.

Gangneung officials implored the public not to visit the city during the holidays for the sake of containing the virus.

Out of 1,092 people who were diagnosed with Covid-19 Tuesday, 1,060 were local transmissions, KDCA data showed.

There were 32 imported cases — nine from Indonesia, six from the United States, five from Russia, four from Britain and one each from the Philippines, Kazakhstan, Sri Lanka, Hungary, Turkey, Sweden, Germany and Australia.

Seventeen patients died, raising total deaths to 739, while 798 people recovered, bringing entire recoveries to 36,726. As of Tuesday at midnight, Korea had counted 52,550 Covid-19 patients in all. 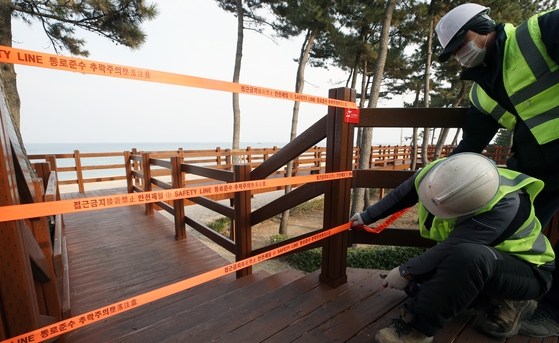 Officials in Gangneung, Gangwon, close off walking trails along Gyeongpo Beach Wednesday as the city prepares to block access to all its major tourist destinations to prevent possible transmission of the coronavirus. [YONHAP]