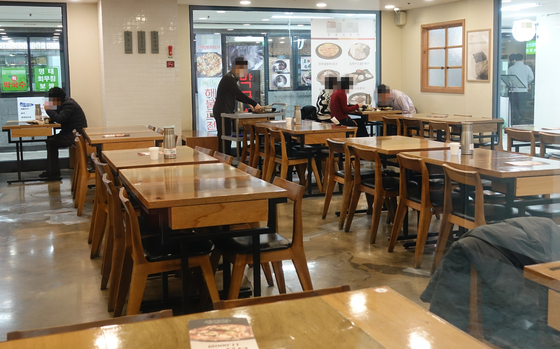 The 900-billion-won ($813 million) package consists of 800 billion won in loans offered with a low interest rate and 100 billion won in special coupons that residents can use in their local communities.

A new rule prohibiting people from engaging in any social gatherings of five people or more went into effect Wednesday in Seoul, Incheon and Gyeonggi — together called the greater Seoul area or the Seoul metropolitan area — as health authorities try to prevent the virus from spreading over Christmas and New Year’s.

On top of that rule, the greater Seoul area has been subject to Level 2.5 social distancing measures — the second-highest level in the five-tier social distancing scheme — for several weeks, which have hurt sales for a slew of industries and stores.

To help local businesses, the Seoul Metropolitan Government said in a statement that it would distribute special coupons starting next Monday, which people can buy to receive at least 20 percent worth of additional services when they use them at participating stores.

Each person will be able to purchase between 100,000 won and 300,000 won worth of coupons. For each coupon, the city explained it would match the cost with an additional 10 percent, while the stores, in turn, will offer 10 percent in additional services.

For instance, someone who pays 100,000 won for a coupon will actually be given a coupon worth 110,000 won after the city adds its 10 percent on the user’s payment. When the person presents the coupon to a store where it can be used, they will be offered 120,000 won worth of services.

The city said the coupons will be sold on 15 different smartphone apps that sell the better-known Seoul Love Coupon, which the city has also been distributing since early this year to help small businesses hit by the pandemic. The apps include Bizplay Zeropay and Checkpay.

Participating stores include restaurants, coffee shops, study rooms and hair salons. A map of stores where the coupons can be used can be found on the smartphone app Z-Map.

Aside from the coupons, the city government said it would also allow low-interest loans to small businesses and slash rent for stores operating in city-owned buildings by nearly half.