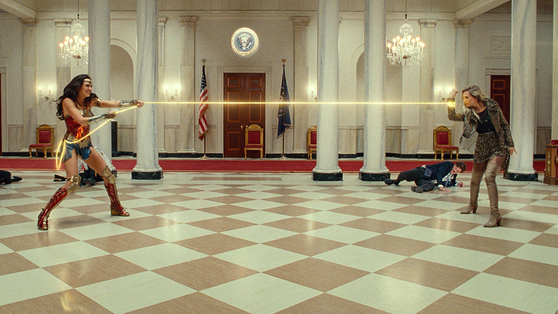 
The Christmas season's one and only highly anticipated film “Wonder Woman 1984” climbed to No. 1 in the daily box office, drawing in 51,215 ticket sales at 2,185 screenings on its debut on Wednesday, Korean Film Council data showed.

The total number of nationwide ticket sales on Wednesday was tallied at 65,199, the highest number reached this month. Before “Wonder Woman 1984,” the daily box office sold scarcely over 20,000 tickets on Tuesday.

It still remains to be seen if the Hollywood film could provide a stimulus to break the ice for the frozen box office due to a surge in daily coronavirus cases.

Christopher Nolan’s “Tenet,” which was released earlier in August in the midst of another uptick of cases, sold about 137,000 tickets on its premiere.

Directed by Patty Jenkins, “Wonder Woman 1984” features another tale of Diana Prince, the Wonder Woman, as she tries to save humankind from destruction due to the mythical "dreamstone" which grants any user a wish.