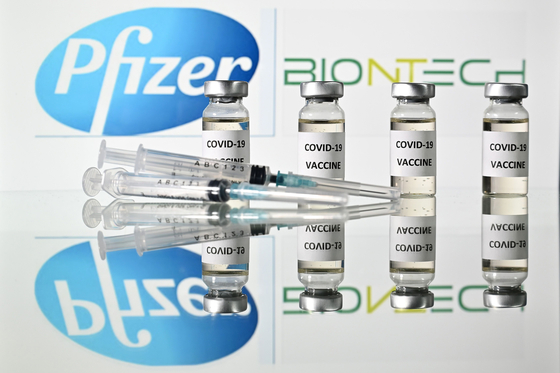 The Korean government announced Thursday it signed new Covid-19 vaccine deals with two drug companies as the nation fights an uphill battle against the coronavirus. [YONHAP]

Chung’s statement came as the Korea Disease Control and Prevention Agency (KDCA) said the country added 985 new coronavirus infections Wednesday, down from 1,092 the day before. Most cases were found in the greater Seoul area — 314 in Seoul, 277 in Gyeonggi and 53 in Incheon.

With the latest deals added, the Korean government has secured sufficient vaccine doses for 26 million people in total so far, including the first deal it signed with AstraZeneca earlier this month.

Next month, the government plans to ink additional deals with Moderna with Covax Facility, a global Covid-19 vaccine allocation plan. Each deal would supply enough doses to vaccinate 10 million people.

If everything goes as planned, Korea will have secured sufficient supply for 46 million people by next January, about 90 percent of the Korean population.

But the timeline of when inoculations will actually begin remains murky.

Injections with the AstraZeneca vaccines are expected to begin in February or March next year, Chung said earlier this week.

The prime minister said Thursday that injections with the Janssen vaccines could start in the second quarter of 2021, but didn’t specify further.

The Pfizer vaccines are expected to arrive in the third quarter, but the government said it was continuing negotiations with the drug company to move the arrival date up to the second quarter.

Until then, local health authorities hope to contain the ongoing surge of coronavirus cases through stringent social distancing measures.

National parks and popular Jan. 1 sunrise spots will shut down during the same period, while hotels, resorts and guesthouses must keep half their rooms vacant.

Out of the 985 people who were diagnosed with Covid-19 Wednesday, 955 were due to local transmissions, KDCA data showed.

On top of the 314 cases found in Seoul, 277 in Gyeonggi and 53 in Incheon, there were 50 cases in North Gyeongsang, 46 in North Chungcheong, 43 in Busan, 29 in South Chungcheong, 26 each in Daegu and on Jeju Island, 21 each in Gangwon and South Gyeongsang, 14 in Gwangju, 12 in North Jeolla, 11 in Daejeon, nine in Ulsan, two in South Jeolla and one in Sejong City.

The remaining 30 cases were imported — 14 from the United States, five from Indonesia, three from Myanmar, two from the Philippines and one each from China, Japan, Ukraine, Germany, Sweden and Canada.

Seventeen patients died, raising total deaths to 756, while 699 people recovered, bringing entire recoveries to 37,425. As of Wednesday at midnight, Korea had counted 53,533 Covid-19 patients in all.