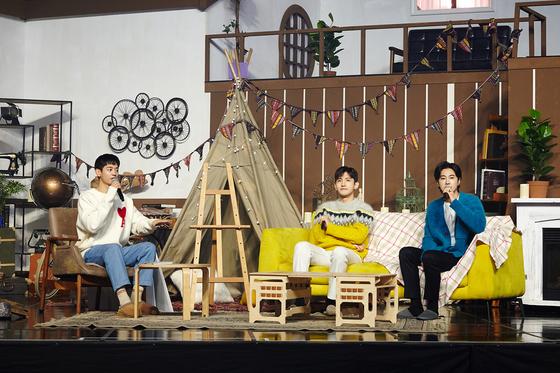 U-Know Yunho, far right, and Max Changmin, center, of the K-pop duo TVXQ, talking with rapper Minho of the boy band Shinee, left, in the duo’s online fan meeting in celebration of the 17th anniversary of their debut on Saturday. [SM ENTERTAINMENT]


The K-pop duo TVXQ held an online meeting with fans in celebration of their 17th anniversary on Saturday afternoon, their agency SM Entertainment said. The show was broadcast live on the Korean streaming site Naver V Live. The two members — U-Know Yunho, whose real name is Jung Yun-ho, and Max Changmin, whose real name Shim Chang-min — entertained fans with quiz sessions, games and a small live concert of their hit songs. Rapper Minho of the boy band Shinee, whose real name is Choi Min-ho, was invited as a guest M.C. for a talk with the duo. [SM ENTERTAINMENT]