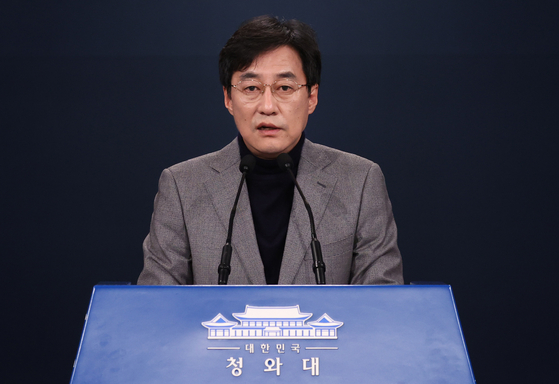 
The ruling Democratic Party (DP) on Saturday urged restraint in the ongoing feud with the state prosecution service, although a few in its ranks are calling for the impeachment of Prosecutor General Yoon Seok-youl.

Last Thursday, the Seoul Administrative Court reversed President Moon Jae-in’s two-month suspension of Yoon, leaving the DP divided about the next steps in the administration’s drive to tame the prosecution service.

Some hardliners in the party, like Rep. Kim Doo-gwan, argued the DP should wield its large majority in the legislature to impeach Yoon — an action unprecedented in Korean political history that would inevitably generate a constitutional standoff.

But cooler heads apparently prevailed, with DP Spokesman Huh Young on Saturday calling on members to “control” their emotions and refrain from positions that could further alienate the party from a public increasingly repelled by the administration’s war against Yoon.

Impeachment proceedings against Yoon “could lead to a rejection by the Constitutional Court,” Huh wrote — in other words, they could fail spectacularly. He added the party should avoid action that might backfire and focus, instead, on building a stronger legal basis for prosecutorial reform.

Yet the factor most instrumental in tempering the party’s antagonism towards the top prosecutor was a public statement from the president himself on Friday.

Saying he respected the court’s decision, Moon issued an apology to the people for the “discomfort and disorder” caused by his appointments — presumably a reference to Yoon as well as Justice Minister Choo Mi-ae, who is leading the charge against the prosecutor general.

The ministry and prosecution service must maintain a “stable, cooperative relationship” to carry out reforms of the prosecution and the redistributing of investigative powers between different agencies, Moon said, according to presidential spokesman Kang Min-seok.

The president zeroed in on the court’s verbal reprimand regarding the allegation that prosecutors conducted illegal surveillance against judges, one of several accusations that prompted the Justice Ministry to hold disciplinary proceedings against Yoon in the first place.

“We hope the prosecution service considers the court’s decision and takes the opportunity to reflect on its exercise of its powers in a fair and measured manner,” Moon said.

“In particular, we hope the [prosecution] no longer generates controversy regarding the collection of private information other than that pertaining to a criminal nature or surveils individuals.”

Moon was commenting on the court’s criticism of the prosecution's “very inappropriate” documents detailing the nature of a particular judge’s prior rulings and public opinions about her. Such documents can be “misused” and “must never be written up in the future,” the court said.

But in regards to whether those documents were grounds to subject Yoon to a two-month suspension, the court ruled there was insufficient evidence as to whether they were used in a manner to pressure a judge.

The court also said proof was lacking on other allegations by the disciplinary committee: that Yoon meddled with a prosecutorial probe into one of his close associates in the prosecution, and his public response to a question about his political future constituted a breach of political neutrality.

What the court did explicitly state, however, was that the disciplinary process that recommended Yoon’s suspension was undertaken in a flawed manner that affected the outcome.

The disciplinary committee legally required four of its seven members to be present to rule on motions to disqualify one of its members, but then three of its members turned down Yoon’s lawyers' motions. That was unlawful, the court said.

While its verdict lifted Yoon’s suspension order by acknowledging it inflicted “irreparable damage” on the prosecutor’s ability to continue his duties, the court also firmly rejected some of the most aggressive claims put forward by Yoon’s lawyers against the Justice Ministry.

There was no evidence to prove the ministry had a political motive to avenge the prosecution’s probes into former Justice Minister Cho Kuk and the Blue House’s alleged meddling into the Ulsan mayoral election in 2018, nor that it was attempting to derail the prosecution’s ongoing investigation of involvement of ruling party figures in the premature shutdown of the Wolsong I nuclear plant, the court said.

Thanking the court for its decision, the prosecutor general swore to do his utmost “to defend the spirit of the Constitution, the rule of law and common sense.”

The court’s decision on Thursday was the second time an administrative court has granted an injunction lifting a suspension order against Yoon, after Justice Minister Choo Mi-ae’s earlier abortive order was reversed on Dec. 1.

While the court may have restored him to office for now, Yoon must still fight to prove the punishment issued by the Justice Ministry against him was illegal with the same court. The final verdict in that trial may not come until after his term ends next July.