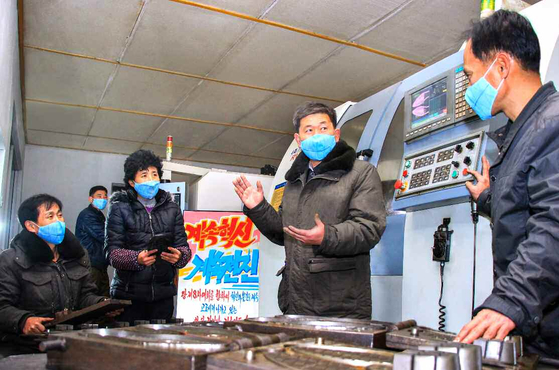 Workers at a shoe factory in Pyongyang are at work wearing masks last Friday. The Rodong Sinmun, North Korea's official party newspaper, disclosed a set of photos in a special feature about its elementary-level workers on Dec. 25. [NEWS 1]

The gap between South and North Korea in terms of GNI per person has widened for the past decade. In 2019, the South’s per capita income was 27 times higher than the North’s, much higher than the difference in 2009, when the multiple was 20.5. In 1999, the value was 15.

North Korea’s GNI, which is the total amount of money earned by a nation’s people and businesses, was 35.6 trillion won last year, one fifty-fourth of South Korea’s GNI. North’s GNI per capita has decreased for two consecutive years. The gap has become wider every year since 2009.

The growth rate of North Korea's GDP in 2019 was estimated at 0.4 percent, positive for the first time in three years. In 2018, the on-year growth rate was minus 4.1 percent, and in 2017, the value was minus 3.5 percent. The positive growth rate was attributable to construction, agricultural, forestry and fishery activities, which grew after contracting.

North Korea’s total trade value was $3.24 billion, 14.1 percent higher than 2018, rebounding from United Nations sanctions that slashed the North’s trade nearly by half in 2018. South Korea’s trade is 322 times bigger than the North’s. China remained as North Korea’s biggest trade partner, followed by Russia and Vietnam.

For imports, mineral fuels were 11.7 percent of the total, followed by plastics. Imports of grain items, such as rice and corn, increased by 242 percent on year.