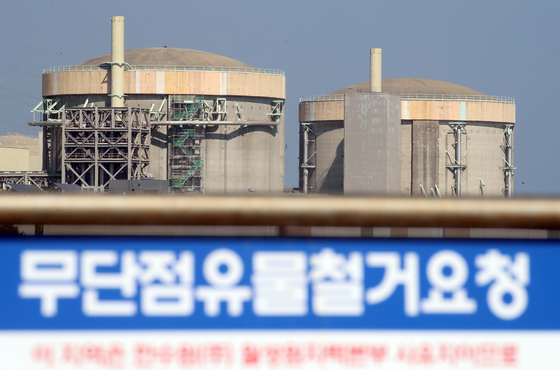 Wolseong nuclear power plant in Gyeongju, North Gyeongsang, which was shut down in 2018. [YONHAP]

The number of power plants fueled by coal and nuclear power will be dramatically reduced by 2034 and replaced with renewable energy sources.

It is a step toward achieving carbon neutrality by 2050, which was announced earlier by President Moon Jae-in.

The plan includes a cutback on nuclear power, which is a clean energy source with zero emissions. The Moon administration has been strongly pushing for the dismantling nuclear power plants, citing the Fukushima, Japan, nuclear plant disaster in 2011.

On Monday, the Ministry of Trade, Industry and Energy in its first long-term energy supply plan in three years announced that by 2034 it will shut 30 coal-fueled power plants that could have operated for 30 years.

Construction of seven coal power plants will continue. Some of the coal plants that will be shut will be converted into liquefied natural gas (LNG) power plants.

The Moon administration has banned the construction of new nuclear power plants or extended the life expectancy of plants currently operating.

Two plants that are currently under construction will be completed.

Of the the renewable energy capacity, 91 percent will be solar (45.6 gigawatts) and wind (24.9 gigawatts) plants.

Under the plan, coal-fueled power plant capacity as a percent of total will be slashed nearly in half, from 28.1 percent as of 2020 to 15 percent by 2034.

During the same period, nuclear power output as a percentage of total will fall from 18.2 percent to 10.1 percent.

The government has targeted the total energy capacity at 125.1 gigawatts, including energy reserves, as it expects maximum demand in 2034 will be 102.5 gigawatts.

The government said it expects an improvement in the environment as renewable energy replaces fossil fuel energy sources. It expects greenhouse gas emissions to shrink 23.6 percent by 2030 to 192 million tons compared to 252 million tons emitted in 2017.

It added that costs will not be a problem as wind and solar energy will be as cheap as other sources, including coal, from 2028.

The latest energy supply plan announced by the ministry comes as the government and Korea Electric Power announced a change to the power billing system, so prices better reflect fuel costs.