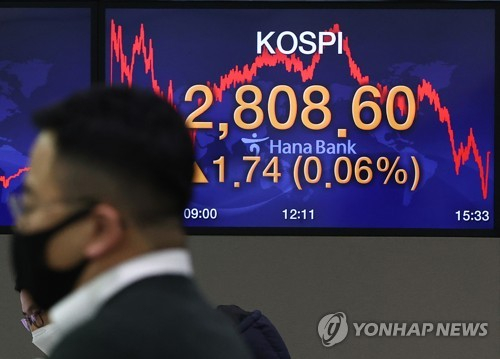 The screen at the dealing room at Hana Bank's main branch in central Seoul shows the benchmark Kospi closed at 2,808.60 on Monday, up 0.06 percent from the previous trading day. It is a new record for the index. [YONHAP]

Monday was the last day for investors to purchase stocks in order to receive year-end dividends.

The index had soared to as high as 2,834.59 during intraday trading, but retreated as retail investors offloaded 932.8 billion won ($851 million) of stocks in an attempt to avoid paying stock transfer taxes and to seek year-end profits.

Investors with 1 billion won or more worth in a single company's stocks by close on Monday were subject to taxation.

On the previous trading day on Friday, its shares jumped up 5.28 percent.

Analysts are expecting a large dividend payout from the chipmaker as 2020 is the final year of the company's three-year shareholder return program that promises to use at least half of its free cash flow for shareholder returns via purchase or retirement of stocks or through special dividends.

Special dividends are also a way for Samsung's owner family to secure money to pay over 11 trillion won in inheritance tax following the death of late Chairman Lee Kun-hee.

"We are expecting the company to expand dividend payouts as much as possible," said Kang Hyun-jung, a researcher from Kyobo Securities.

"Samsung Electronics will account for some 44 percent of total dividends paid out by domestic companies in 2020, taking into account special dividends expected to be around six trillion won," said Lee Kyoung-min, an analyst from Daishin Securities.

Despite the boost to Samsung Electronics, most of the top blue chips actually lost.

Seoul's stock market closes on Wednesday and will reopen for trading on Jan. 4.