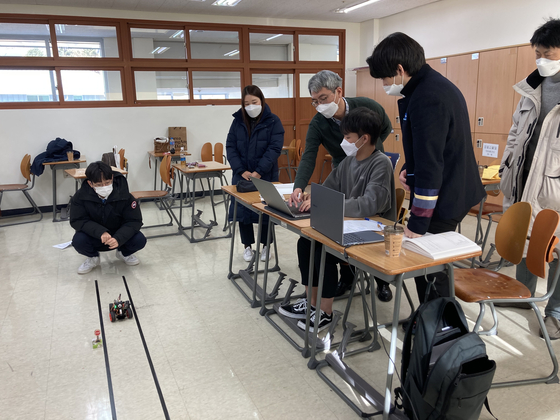 
Witnessing the pandemic’s disruption to education around the world, Kim Kang-mi and a cohort of teachers across high schools in Korea thought something ought to be done.

“I teach my students basic theories about computer programming and how they are utilized in their everyday lives, but I wanted them to have a hands-on experience in actually trying to code a program and run it,” Kim said in an interview on Dec. 26, the day her students and other high school students across Korea entered a coding and programming competition run by Korea’s Ministry of Science and ICT and the National IT Industry Promotion Agency (NIPA).

Kim helped four of her students from Bukwon Girls High School in Wonju, Gangwon, sign up for the Data Science Ambassadors Computer Science Program in November, a monthlong program on learning to code in Python and building a model of a self-driving car. The program was mostly held virtually due to coronavirus concerns, with a few in-person experiments held in small groups.

“I always knew I wanted to do something good for the world using computer programming, and I always believed that artificial intelligence [AI] could be used to make our lives better, but I just didn’t know where to start,” said Yun Ha-yun, a freshman at Bukwon. “I had learned about Python before, but I had no idea that it can be applied to create programs for driverless cars. I cannot wait to try more projects using AI programs.”

Yun and her team, along with 200 other high school students across Korea, attended four weeks of classes on AI taught by Lee Jeong-kyu, professor of computer science and engineering at the University of Bridgeport in Connecticut, starting mid-November. The classes covered topics including Python, a programming language, and convolutional neural networks, which is a type of machine learning that enables a machine to analyze images and learn from them.

“These are materials that used to be taught across graduate schools in the United States many years ago, but are today offered in many high schools,” Lee said. “There are plenty of materials and courses online on AI programs, but what the students need are the hands-on experiences of actually writing the programs and applying them to see what the programs can do in real life. These kinds of exposures make a huge difference later in their education and careers.”

Last weekend, the top 10 teams presented their findings in tweaking Python programs on driverless cars. The top three teams with the most innovative and apt solutions were selected as finalists. The presentations were made virtually due to the Covid-19 pandemic and social distancing recommendations.

“We encountered problems when the camera attached to the model failed to understand the stop sign,” said Han Jae-won, a sophomore in high school at Chengshim International Academy, an international school in Gapyeong County, Gyeonggi. “We tried to counter that problem by tweaking the configuration file of the program, to boost its analysis capacity of images, and also fed more images to improve the capacity of the convolutional neural network.” 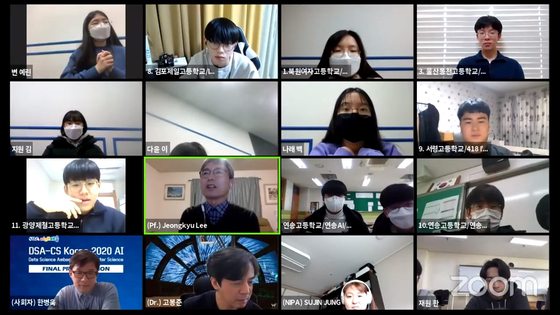 
This was the second year that NIPA ran AI education programs for high schools across Korea. In their first year, the programs were offered across five regions in Korea including Gangwon. This year, the regions were expanded to additionally include Gyeonggi, South Chungcheong, Ulsan, North Gyeongsang and Jeju Island. NIPA has also hired and trained at least 100 teachers on AI programming per region.

“We have launched AI programs across elementary, middle and high schools in Korea since 2019, but this was the first time that we ran an advanced program such as this one,” said Jung Su-jin, director of the regional software innovation team at NIPA. “What we’re trying to do is to ensure that high school students across all regions in Korea get equal education on the subject, as educational opportunities tend to favor those living in the greater Seoul area. Schools in rural areas definitely lack the teachers and programs that specialize in AI education. We’re hoping to offer the program next year as well.”

Digital economy, AI and big data are all terms often used by the government in many of its latest initiatives.

The Ministry of Education announced earlier this year that it will be investing in digital infrastructure at elementary, middle and high schools throughout the country to ensure that all classrooms have access to WiFi by 2024. The government has also designated 34 high schools nationwide to focus on AI education, including Gimpojeil High School, and has set its goals on training at least 1,000 additional college students each year as AI majors.

“The term ‘fourth industrial revolution’ has been a huge trend in Korea in recent years, and AI occupies a central position when people speak of the revolution,” said Ko Bong-jun, a vice president at Samsung Electronics, virtually addressing the students at the competition on Dec. 26.

“It’s important to know where AI will be used in the future, so that we may be able to best position ourselves,” he said. “The future will require more talents who are able to understand and use the world of AI but also maintain the best qualities of being human, which includes problem-solving skills, critical thinking skills and emotional intelligence amongst others.”