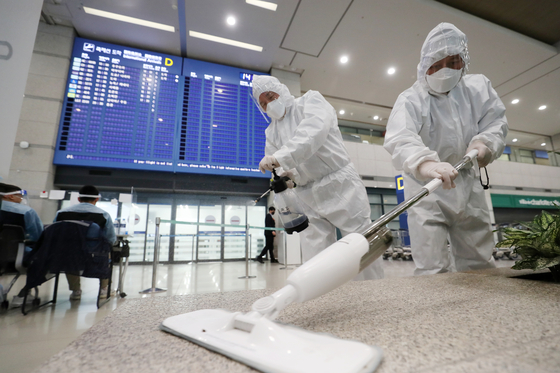 The Korea Disease Control and Prevention Agency (KDCA) said it was the first time the variant was found in Korea, though no transmissions appear to have occurred domestically since the family was under quarantine.

The news came as the KDCA said Monday morning Korea added 808 new Covid-19 cases the day before, down from 970 last Saturday. Health officials barely celebrated the decline, however, noting it was the result of fewer tests conducted over the weekend.

In a Monday press briefing, the KDCA said the Korean family of three had been living in London before they landed at Incheon International Airport on Dec. 22. Whether they flew directly from London to Incheon was not mentioned. Korea has banned all flights from London's Heathrow Airport to Incheon International Airport from Dec. 23 due to the exploding number of coronavirus cases in Britain.

The family was going through a coronavirus test at the airport when their results turned out positive, the KDCA said. They were immediately put under quarantine in an isolated location for treatment.

It was only after the three patients were isolated and health officials were analyzing samples from people who tested positive after recently coming from Britain that they realized Monday the family was infected with the new variant.

The new variant was first spotted in September in southeastern England, and British health officials have warned the variant could be up to 70 percent more contagious than other variants of the coronavirus. Daily cases in Britain have been soaring ever since. The variant has also been detected in countries outside Britain, mostly in Europe but including some in Asia as well, namely Japan and Singapore.

Alarmed by the spread, the KDCA said Monday that the government has decided to extend its ban on all flights from London’s Heathrow Airport to Incheon International Airport by another week, until Jan. 7, and mandate all people arriving in Korea from Britain or South Africa to submit negative results on a PCR Covid-19 test, including those who had a layover in either country.

A coronavirus variant different from the one in Britain has been spreading in South Africa lately, leading to a surge in cases there.

Everyone arriving from any foreign country will also have to clear a Covid-19 test towards the end of their compulsory 14-day self-quarantine period in order to be released from isolation, the KDCA continued, in light of the fact that the new variant from Britain was being detected in various other countries. 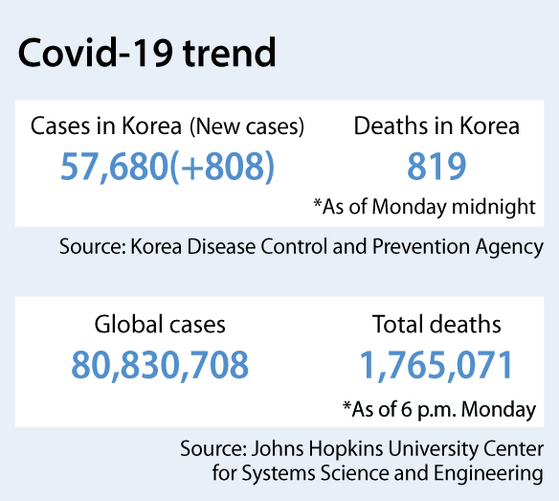 Korea’s first case of the highly transmissible virus variant from Britain comes at a precarious time, as daily cases here show no signs of falling.

Among 808 people who were diagnosed with the coronavirus Sunday, 787 were due to local transmissions — 297 cases were found in Seoul, 188 in Gyeonggi, 45 each in Incheon and North Gyeongsang, 35 in South Chungcheong, 34 in Busan, 30 in North Chungcheong, 27 in Gangwon, 25 in South Gyeongsang, 24 in Daegu, 12 in Gwangju, 11 on Jeju Island, seven in South Jeolla, three in Daejeon, two in Sejong City and one each in Ulsan and North Jeolla.

All 17 major cities and provinces saw at least one new patient.

The remaining 21 patients were infected abroad — three each from India, Britain and the United States, two each from Russia, Poland and Pakistan, and one each from Myanmar, Jordan, the United Arab Emirates, Colombia, Mexico and Ghana.

Eleven patients died Sunday, raising total deaths to 819, while 228 people recovered, bringing the total number of recoveries to 39,268. As of Sunday at midnight, Korea had counted 57,680 Covid-19 patients in all.

Over the past week, an average of 984 people have been diagnosed with the coronavirus nationwide each day, KCDA data showed Monday, of whom 673 people were in the greater Seoul area encompassing Seoul, Incheon and Gyeonggi. The Chungcheong areas of Daejeon, Sejong City, North Chungcheong and South Chungcheong saw an average of about 94 people each day, due mainly to clusters in nursing homes and hospitals.

The Seoul Dongbu Detention Center in Songpa District, southern Seoul, added one more case to reach 529 cases in total, including 487 inmates, making it the fourth largest cluster the country has ever seen.

In other parts of the country, cases were found in houses of worship, restaurants, welfare facilities and social gatherings.

Wary that the Christmas and New Year’s holidays might lead to an even larger outbreak, the central government has been banning any social gatherings of five people or more in the greater Seoul area since last Wednesday, effective through Jan. 3. The same rule has been applied to people outside the greater Seoul area eating in restaurants from Thursday.

National parks and popular Jan. 1 sunrise spots will also shut during the same period, while hotels, resorts and guesthouses must keep half their rooms vacant.